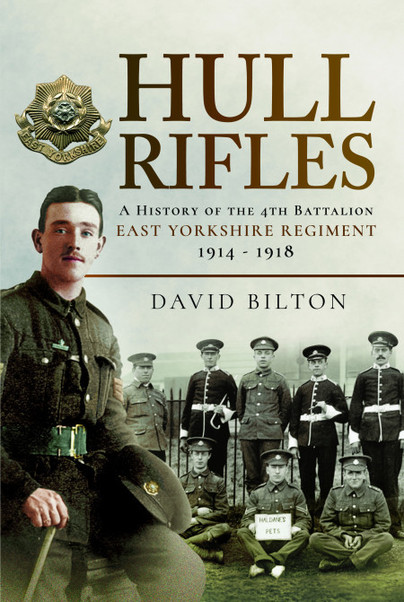 Preorder
Add to Wishlist
You'll be £20.00 closer to your next £10.00 credit when you purchase Hull Rifles. What's this?
+£4.50 UK Delivery or free UK delivery if order is over £35
(click here for international delivery rates)

Hull Rifles looks at the 4th East Yorkshire Regiment during the Great War and examines the origins of the battalion and its history over the three years it fought in France and Belgium. The battalion was involved in some of the bloodiest battles of the war and suffered such high casualty rates in early 1918 that the unit ceased to exist, except in name.

The men of the original battalion were Territorials, part-time soldiers who gave their free time to provide home defence during a war. Officially formed on 1 April 1908 as a result of the Haldane changes, the unit could trace its history back hundreds of years and was one of the oldest in the country. All the men were volunteers and held a full-time job. They had committed themselves to regular weekly training and a camp in the summer where they practised large-scale manoeuvres with other units. When the call came to volunteer for overseas service, 80 per cent came forward. Their ranks were quickly filled with new volunteers who were prepared to fight abroad.

Volunteer numbers were high and quickly the overseas battalion was at full strength, as was a second for home service. A third battalion was also formed to provide replacements for the men at the Front. As well as fighting on the Western Front, a battalion was sent to guard Bermuda for the duration.

The text uses letters, newspaper cuttings and the war diary to provide a detailed picture of a typical Territorial battalion at war. Also included are many previously unseen photographs, a nominal list of the men who volunteered before Christmas 1915, including a convicted murderer, awards, casualty details and lists of officers.