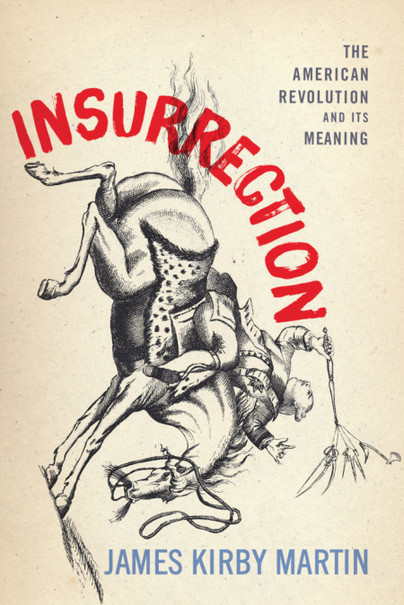 The American Revolution and Its Meaning

Add to Basket
Add to Wishlist
You'll be £16.99 closer to your next £10.00 credit when you purchase Insurrection. What's this?
+£4.50 UK Delivery or free UK delivery if order is over £35
(click here for international delivery rates)

The Revolutionary generation believed they were living in dangerous, turbulent times. Their uprising against British imperial authority beginning in the 1760's represented an attempt to preserve their liberties in the face of what they perceived as a conspiracy from above, ultimately brought

on by a tyrannical King and Parliament. The actual number of insurgents—we call them rebels or patriots—represented no more than 20 to 25 percent of the populace. Approximately the same number of persons refused to renounce their loyalty to the British Crown; and thousands of them joined British arms to crush the patriot insurrection. Not committed to supporting either side were large numbers of neutrals whose allegiance varied with the their proximity to competing military forces. Once independence was secured, however, a great shift occurred. Some key revolutionary leaders began to worry that the common people, if given too much political authority, would produce agitation from below that could destroy the delicate fabric of the newly established republic. Reckoning with this social and political disorder resulted in a series of constitutional settlements. What emerged was a more democratic system of government operating, at least theoretically, in the name of a sovereign people who had replaced the King and Parliament.

In Insurrection: The American Revolution and Its Meaning, award-winning historian James Kirby Martin discusses the causes, course, and consequences of the War for Independence. While interpretations of the Revolution and its short- and long-term meaning abound, Martin emphasizes that the insurrection against British monarchism led to more profound changes in human institutions and ideals than many of the Revolutionary leaders actually envisioned or wanted. Once unleashed, the genie of greater freedom and liberty for all could not be forced back into the bottle, no matter how much some persons would have desired.

JAMES KIRBY MARTIN is Emeritus Professor of History at the University of Houston. Among his many books are Benedict Arnold, Revolutionary Hero: An American Warrior Reconsidered, A Respectable Army: The Military Origins of the Republic, 1763–1789, with Mark Edward Lender, and Theaters of the American Revolution: Northern, Middle, Southern, Western, Naval, edited with David L. Preston (Westholme 2017).