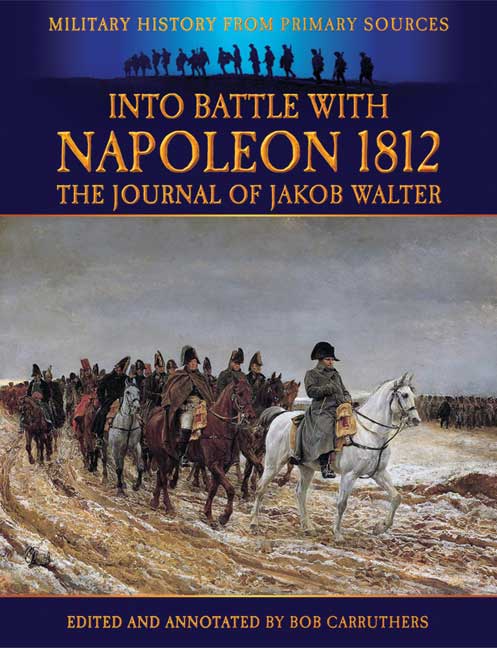 Into Battle With Napoleon 1812 (Paperback)

The Journal of Jakob Walter

Add to Basket
Add to Wishlist
You'll be £9.99 closer to your next £10.00 credit when you purchase Into Battle With Napoleon 1812. What's this?
+£4.50 UK Delivery or free UK delivery if order is over £35
(click here for international delivery rates)

This is the contemporary account of Jakob Walter, a Westphalian conscript in Napoleon's Grande Armée. Walter took part in the Emperor's campaigns against Prussia, Austria and finally, the disastrous Russian campaign of 1812. This is what it really meant to “march with the Emperor”.

This volume is illustrated throughout with the watercolours produced by Albrecht Adam, another German who served in the ranks of Napoleon's armies, who witnessed many of the same scenes as Jakob Walter. Together the text and illustrations provide a powerful primary insight in to the events of 1812 as witnessed by the men who were there.
This book is part of the 'Military History From Primary Sources' series, a new military history range compiled and edited by Emmy Award winning author and historian Bob Carruthers. The series draws on primary sources and contemporary documents to provide a new insight into the true nature of warfare.

This is an excellent source for the later part of the Napoleonic Wars, providing a rare insight into the experiences of a private soldier.

Walter's Journal is much quoted in works dealing with Napoleon's venture in Russia. It was last published, in Kansas, in 1938. This update comes not a moment too soon. Bob Carruthers keeps his introduction down to the minimum and lets Jakob 'do the talking'.

The selection of illustrations, most of which are watercolours by Albrecht Adam, another German who served and witnessed life in Napoleon's Grand Armee, are excellent.

Pen and Sword have recently begun publishing affordable, paperback editions of accounts from eyewitnesses under the series entitled “Military History From Primary Sources”. Having seen numerous quotes from Jakob Walter in the books on the 1812 campaign that I had read last year, I was keen to read his memoir in full.

It’s an engrossing, but easy read. Walter has a simple, conversational and straightforward writing style and I, who am not a fast reader, was able to read the book over a single weekend.

This is a valuable memoir of the period and particularly the 1812 campaign and it is fabulous to have a version that is easily available to enthusiasts, wargamers and other ‘students’ of Napoleonic history.