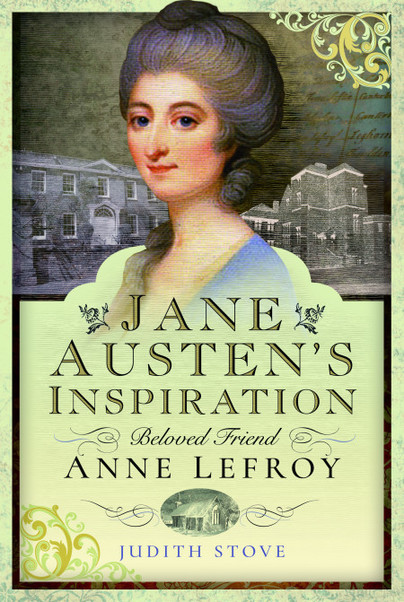 Click here for help on how to download our eBooks
Add to Basket
You'll be £4.99 closer to your next £10.00 credit when you purchase Jane Austen's Inspiration. What's this?
Need a currency converter? Check XE.com for live rates

In the first biography of Anne Lefroy, Judith Stove investigates the life of a writer who had was a key influence on the life and works of Jane Austen.

As a female writer of both prose and verse, Anne was a source of inspiration to Jane as she developed her own talents. Jane was closer in age to Anne’s children, yet despite their age difference, they developed a mutual respect and admiration for each other over many years.

Judith Stove brings a wealth of insight to this illuminating history of a literary friendship. She has uncovered a rich background of information relating to Anne Lefroy’s circle, and her book addresses developments across a period of great social and political change. Setting Lefroy’s life in context, she looks at the war against Napoleon and illustrates evolutions in healthcare as well as changes in religious beliefs and practices that impacted upon the lives of Lefroy and her circle.

Meticulous and affectionate portrait of a literary friendship.

This is a new biography of Anne Lefroy, which Judy Stove investigates the life of a writer who had a direct and undeniable influence on the life and works of Jane Austen.

Jane had a very devoted friend in Anne Lefroy, and they shared a wonderful friendship that was essential in both their lives and their creative talents in their writing styles.

Judy Stove, a member of the Jane Austen Society of Australia, put forth her insight to this story of the history of a literary friendship. She has uncovered fascinating snippets of information relating to Anne Lefroy's circle, and her book addresses developments across a period of great social and political change. Setting Lefroy's life in context, she looks at the war against Napoleon and illustrates evolutions in healthcare as well as changes in religious beliefs and practices that impacted upon the lives of Lefroy and her circle.

I did find this book to be slow read, but a delightful read. Judith has a lovely writing style and was a perfect fit in writing this story. Highly recommended to any Jane Austen fans.

We keep learning things about Jane Austen that we didn't previously know - at the moment I'm enthralled by the ITV Sunday night series Sanditon, although probably more than fifty per cent is made up by Andrew Davies... For me Jane Austen is really the UK's first novelist, everything that went before it pales into insignificance; this book is a fascinating insight into how she was inspired, and largely by whom. Excellent.

If you really enjoy in depth historical storytelling with lots of context, this is a book for you: Stove’s research is extensive and incredibly detailed. Anne Lefroy and her family history is given life and she becomes a three-dimensional character in her own right. I am not sure I’m convinced that Anne was Jane Austen’s Inspiration, but she undoubtedly was a beloved and treasured friend. It is always interesting to read about figures, and particularly female figures, who are an important part of the lives of well-known historical figures who outshine their social circle: it makes these people more human, and you can understand their friendships and lives in a more intimate way.

Anne was an interesting and intelligent woman, a clergyman's wife and a writer, a mother and a promotor of smallpox vaccination. Anne's husband's nephew was Tom Lefroy, notorious for Jane Austen's mentions of their"profligate and shocking" behavior of "dancing and sitting down together." Their flirtation came to an end with Jane writing, "My tears flow as I write."

We don't really know what occurred between Tom and Jane, but Ben Lefroy's wife Anna Austen wrote that Tom's mother Anne disliked him for "he had behaved so ill to Jane Austen." Was Jane's heart wounded? Were the pair separated by Anne Lefroy, as in the story of Persuasion? Yet at her death, Jane wrote a heartfelt poem for Anne Lefroy.

Stover combs through first sources for clues to their relationship--including Austen's letters and Anne Lefroy's letters--in the first chapter, The Austen Connection. In part two, Anne Before Jane, she covers Anne's family history. Part three, Through a Glass Darkly, considers Anne's life and family and the events and society of her time. Your Angel Mother tells of Anne's death, Jane's memorial poem, and concludes the stories of her children. The book includes illustrations.

A well-researched, informative book that will be a fine addition to the library of any Jane Austen fan, or even of history buffs in general

There is absolutely no doubt in my mind that Stove has spent incredible amounts of times researching for this book and gathering all of her impressive information.

JUDITH STOVE is currently Adjunct Lecturer in the Faculty of Science, University of New South Wales, Australia. She is an active member of the Jane Austen Society of Australia. Judith has published extensively on a range of topics in history and literature, from the Quakers in colonial Australia, to virtue and value in the twentieth century.

Judith’s first full-length book, The Missing Monument Murders (Waterside Press, 2016), revealed a long-forgotten story of fraud and crime in Jane Austen’s extended family (‘presents the most amazing evidence and invites the reader to be judge and jury,’ Babette Smith, The Weekend Australian).