Add to Basket
Add to Wishlist
You'll be £17.50 closer to your next £10.00 credit when you purchase Joseph Locke. What's this?
+£4.50 UK Delivery or free UK delivery if order is over £35
(click here for international delivery rates)

Most historians recognise the work of three engineers as being the men who developed the railways from slow, lumbering colliery lines into fast, inter-city routes. Two are very well known: Robert Stephenson and Isambard Kingdom Brunel. The third was Joseph Locke, who should be recognised for having made a contribution just as great as that of the other two.

The Locke family had been colliery managers and overseers for many generations and Joseph, once he had completed his very rudimentary education at Barnsley Grammar School at the age of thirteen, seemed set to follow in their footsteps. However, at the age of nineteen he was taken on as an apprentice by an old friend of his father, George Stephenson, and sent to the new locomotive works at Newcastle. His enthusiasm and willingness to learn soon brought promotion, and he became a highly valued assistant engineer on the prestigious Liverpool & Manchester Railway.

During his time there he wrote a pamphlet with Robert Stephenson, arguing the case for steam locomotives and had the embarrassing task of having to correct calculations for a tunnel being built under the direct supervision of George Stephenson. After its opening, he moved on to work on the Grand Junction Railway, at the start working alongside Stephenson rather than as his assistant. But before long, they had quarrelled and the directors handed the whole works over to Lockes control. It was the turning point of his life.

Locke was to continue as chief engineer on some of the most important lines in Britain, and his reputation grew to the point where he was also in demand for work in mainland Europe, building major routes in France, the Netherlands and Spain. He became a wealthy man, purchasing the manor of Honiton in Devon and sat in Parliament as the Liberal member for that constituency. He received many honours during his lifetime and died while on holiday at Scotland in 1860 at the age of fifty-five.

This book is an interesting read, offering a useful summary of Locke's career and attempting to 'rescue' him from relative obscurity.

Anthony Burton gives us an easy-to-read insight into Barnsley-born Locke's professional and personal life, and his quite diverse loves of travel, shooting, and poetry.

Article: 'Author steams ahead with biography of railway pioneer' by Mike Cotton as featured by

A readable introduction to the life of Joseph Locke who is a key individual recognised at the time of his death as one of the leaders of the engineering world with Stephenson and Brunel who died within two years of each other. His role deserves to be more widely recognised and his contribution to the project management of early main-line railway lines better understood.

Anthony Burton always writes a readable book and, though offering little new in this biography, rightly ensures
that Joseph Locke is seen as one of the engineering greats. Strangely enough, the triumvirate of Robert
Stephenson, Isambard Brunel and Joseph Locke died within months of each other. Locke’s more modest
gravestone is in Kensal Green Cemetery not far from the larger monument to Brunel. Yet it was Locke who did
even more than Brunel to shape Britain’s railways. 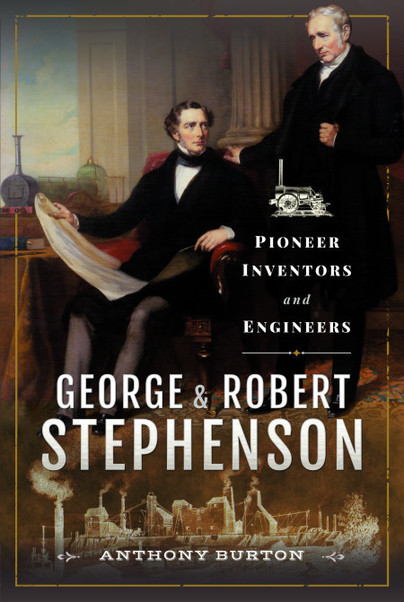 This is a new biography of two great British engineering pioneers, who did much to develop the world we now live in. George and Robert Stephenson were at the forefront of early railways and were at the cutting edge of modern engineering history. Industrial historian Anthony Burton looks into these two giants of the late Georgian and early Victorian age, who were responsible for the development of much of the early railway map in both Britain and other parts of the world. The work examines the lives of the two men and their ability to overcome some of the most pressing engineering problems of their…

Click here to buy both titles for £35.00
More titles by Anthony Burton
Preorder