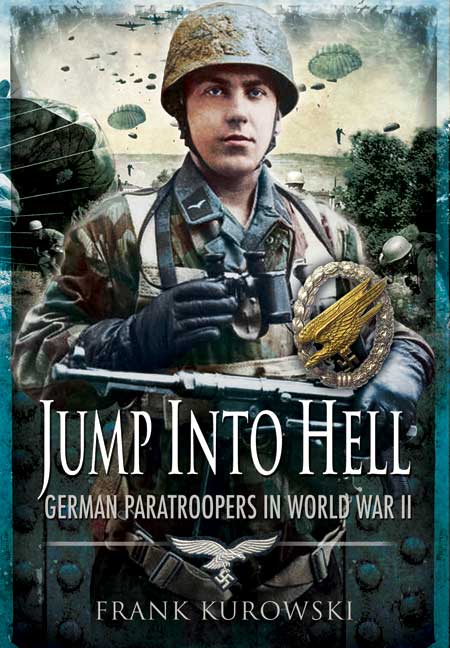 Add to Basket
Add to Wishlist
You'll be £25.00 closer to your next £10.00 credit when you purchase Jump into Hell. What's this?
+£4.50 UK Delivery or free UK delivery if order is over £35
(click here for international delivery rates)

In this action-packed account appearing for the first time in English Franz Kurowski straps readers into the harness with German paratroopers, the elite Fallschirmjager, as they jump into the inferno of combat in World War II.

When the war erupted, airborne troops joined nose-diving Stukas and thundering panzers as a crucial and fearsome part of the Nazi juggernaut that swept across Europe. In April 1940, the Fallschirmjager cascaded into Denmark and Norway, where they seized important air bases. A month later, in one of the war's most daring assaults, paratroopers landed at Eben Emael and captured the Belgian fortress.

The most famous German airborne offensive came in May 1941 with Operation Mercury, the invasion of Crete. The Fallschirmjager encountered difficulties right after jumping but ultimately drove the British from the island, though they suffered such high casualties that Hitler would not allow another large-scale drop.

After Crete, the paratroopers served mainly as motorized infantry for ground attacks. In this role, they fought in North Africa; on Sicily; at Monte Cassino and elsewhere in Italy; in Normandy, where they defended against the Allied invasion starting on D-Day in June 1944; and on the Eastern Front.

A master of reconstructing small-unit actions, Kurowski captures all the drama, excitement, and terror experienced by German paratroopers, from the nervous anticipation inside a darkened airplane to do-or-die assaults under heavy
fire and the deep comradeship that bound the Fallschirmjager for life.

FRANZ KUROWSKI, who served as a journalist with the German Army in World War II, has written numerous books about the war. His other works include Panzer Aces, Infantry Aces, Luftwaffe Aces, The Brandenburger Commandos, Das Afrika Korps, and Panzergrenadier Aces.

A useful overview of the German Airborne forces during WWII. Plenty of maps and images are spread through the chapters- An engaging read.

This is a thoroughly absorbing history of the German airborne arm and an excellent basis for further research.

An action packed account, peering for the first time in English, of the German paratroopers as they jump into the inferno of combat in World War II. The author captures all the drama, excitement and terror they experienced.

kurowski captures all the drama, excitement, and terror experienced by German paratroopers and the comradeship that bound the fallschrimjager for life. The most famous German airborne offensive came in May 1941 with Operation Mercury, the invasion of Crete. The fallschrimjager encountered difficulties after jumping but ultimately drove the British from the island, despite suffering high casualties.