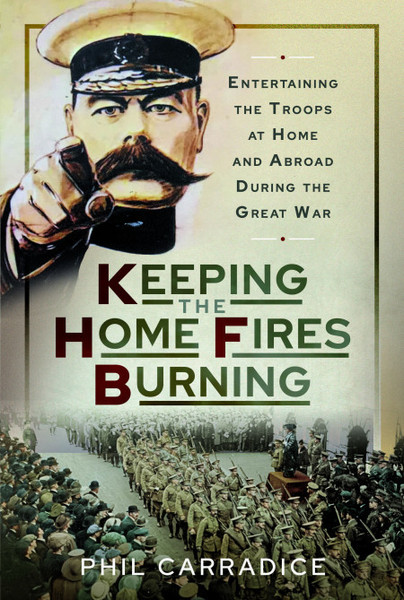 Entertaining the Troops at Home and Abroad During the Great War

Add to Basket
Add to Wishlist
You'll be £20.00 closer to your next £10.00 credit when you purchase Keeping the Home Fires Burning. What's this?
+£4.50 UK Delivery or free UK delivery if order is over £40
(click here for international delivery rates)

Keeping the Home Fires Burning tells the story of how the troops and the general public were kept happy and content during the First World War. Between 1914 and 1918 there was entertainment of the masses for the sole purpose of promotion of the war effort. It was the first time that a concerted effort to raise and sustain morale was ever made by any British government and was a combination of government sponsored ideas and lucky happenstance. It was all picked up and used by the new Propaganda Ministry.

The range of activities was wide and varied, from poetry to cinema, from music hall singers and artists to the creation of battlefield heroes. There was postcard humour and deliberate veneration of philanthropists - and war participants - like Woodbine Willie.

The theme of Keeping the Home Fires Burning is backed up by 40 illustrations from the time, including participants, posters, battlefield views and so on.

"This is a worthwhile and enjoyable book containing a substantial amount of material spread comfortably over 200+ pages. In addition to its intrinsic value as such, it also provides an excellent basis, and perhaps inspiration, for more detailed studies and discussions on any number of the individual points that it covers."

Phil Carradice is a historian, and the author of more than 60 books. He also presents a BBC Wales history programme and has broadcast on both radio and television for the BBC. This wealth of experience, and its close association with the entertainment industry, readily explains the casual, sometimes slightly humorous, and relaxed style of writing that becomes immediately apparent in this book and which makes it easy to read whilst providing a broad understanding of the subject matters. It is not a ponderous work, one with every statement being meticulously supported by references, and in fact there are relatively few citations from either primary or secondary sources. There are only just over 100 references in total, about 20% of which are from earlier works by the author. These are in the form of notes, all presented on a chapter-by-chapter basis at the end of the book. The narrative is divided into sixteen chapters which are spread across six designated parts, in addition to an introduction, a prologue and a conclusion.

The style of writing does, in places, result in unclear if not quite misleading conclusions on certain points. For example, a short paragraph at the end of a section on the use of posters for propaganda could be taken to mean that one poster which concludes in large letters ‘Attest now’, which was in use just before conscription took effect in March 1916, was in fact encouraging conscientious objection. This was certainly not the case. Some historians may also question the amount of recruiting success credited by Carradice to the iconic ‘Your Country needs YOU’ poster and also the accuracy of the ‘contemptible little army’ quote attributed to the Kaiser, upon which there has been much discussion over the years.

The book is, in essence, a compendium of essays on some of the non-belligerent aspects of the war, very heavily featuring propaganda in general and Charles Masterman and his Wellington House bureau in particular. It also includes short biographies of key figures such as Woodbine Willie, Bruce Bairnsfather, Ivor Novello and some of the press barons. In the final chapter, Carradice reminds us of the 1917 mutiny of the French troops following the Nivelle fiasco and that nothing on that scale ever occurred within the British Army, notwithstanding the relatively minor incident at the Etaples training camp, for example. A
successful propaganda campaign is given a lot of credit for this maintenance of discipline, particular the tangible aspects such as regular meals, supplies of cigarettes and alcohol, a reliable postal service to and from home and regular leave, as well as the geographical proximity of the Western Front to England, which made home leave possible.

All in all, this is a worthwhile and enjoyable book containing a substantial amount of material spread comfortably over 200+ pages. In addition to its intrinsic value as such, it also provides an excellent basis, and perhaps inspiration, for more detailed studies and discussions on any number of the individual points that it covers,

The thrust of this book is to relay the story of how troops and the wider public, were kept content and at east during World War. The focus is on the entertainment of the population during the Great War, with emphasis on the importance of morale. The topics covered bring to the fore a new and exciting focus of the Great War. Key coverage there in includes the likes of enlistment propaganda, Music Halls and Home entertainment, The Church, as well as the use of art, advertising and promotion of products and so on.

This book written by Phil Carradice is an easy but entertaining read, but it seems well researched and documented. I have always enjoyed books by Carradice, as you kind of always guaranteed a good read. I also enjoyed the notes section and bibliography and will be reading further books that have been listed. This book should be recommended as it does look at an important part of the war that doesn’t get enough recognition.

A brilliant account of the entertainment industry that was specifically geared up and enhanced for the purposes of keeping the public and the military entertained as the first world war started to have an impact. Phil Carradice is one of my favourite P&S authors.

As featured in: 'Not everyone on the frontline was a fan of Ivor Novello's famous songs' 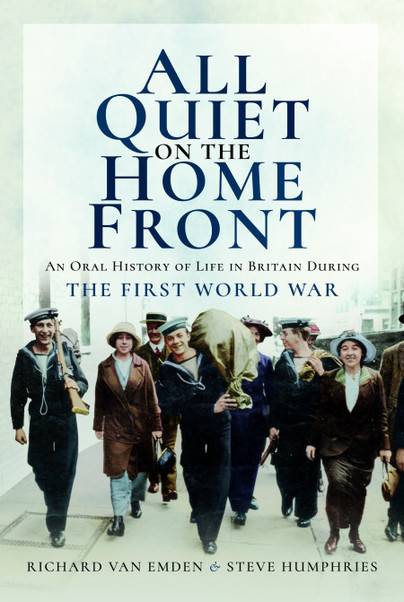 The truth about the sacrifice and suffering on the home front during World War I is rarely discussed. In this book, some of the oldest men and women in the country speak about experiences and events that have remained buried for 85 years. Their testimony shows the same candour and courage we have become accustomed to hearing from veterans of the western front. Those interviewed include a survivor of a Zeppelin raid on Hull in 1915, a Welsh munitions worker recruited as a girl, and a woman rescued from a bombed school after five days. There are also accounts of rural famine, bereavement and the…

Click here to buy both titles for £32.99
More titles by Phil Carradice