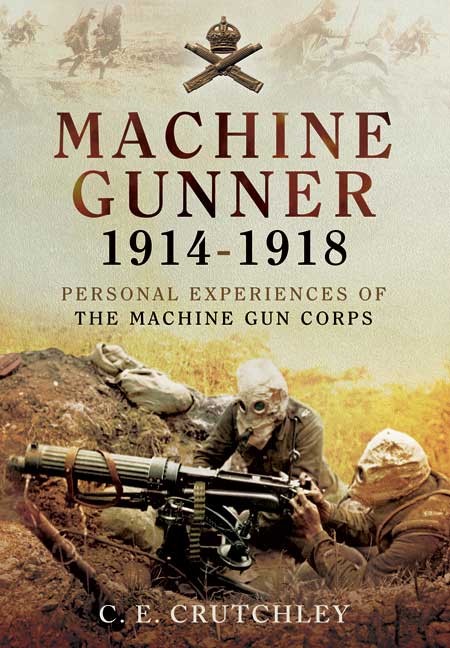 Click here for help on how to download our eBooks
Add to Basket
Add to Wishlist
You'll be £4.99 closer to your next £10.00 credit when you purchase Machine Gunner 1914-18. What's this?
Need a currency converter? Check XE.com for live rates

In 1914 there were only two machine guns supporting a British infantry battalion of 800 men, and in the light of the effectiveness of German and French machine guns the Machine Gun Corps was formed in October 1915. This remarkable book, compiled and edited by C E Crutchley, is a collection of the personal accounts of officers and men who served in the front lines with their machine guns in one of the most ghastly wars, spread over three continents. The strength of the book lies in the fact that these are the actual words of the soldiers themselves, complete with characteristic modes of expression and oddities of emphasis and spelling.

All theatres of war are covered from the defence of the Suez Canal, Gallipoli and Mesopotamia in the east to France and Flanders, the German offensive of March 1918 and the final act on the Western Front that brought the war to an end.

You will not leave this book with greater knowledge of the major events of the war, or even of the employment and methods of the Machine Gun Corps, and indeed to enjoy it you need to bring a fair bit of knowledge of the minutiae of the Great War British Army and its ways, but you will put the book down with enhanced appreciation of the men of that time and of what they so impressively endured

This account was first published 1973 for the Machine Gun Corps Old Comrades Association. It was first reprinted by Pen & Sword in 2005, but this is a timely reprint and one that provides a great deal of insight into the Machine Guns Corps during the war...

...This is of course not the only book about machine gunners in the war – in fact I have reviewed several on these pages – but it is the only I have seen that draws together so many personal accounts in one place. Yet it is as much an account of day-to-day life during war as it is of machine gunners specifically. The men whose accounts are printed recall anecdotes of humour, boredom, drudgery and comradeship.

A worthy addition to the library.

The accounts collected here are very varied, covering a wide range of combat experiences )from bitter nights trapped between the lines to the periods of open warfare) and attitudes (one memorable contributor, writing in 1917, was quite willing to admit to a less than dedicated attitude to many duties!).