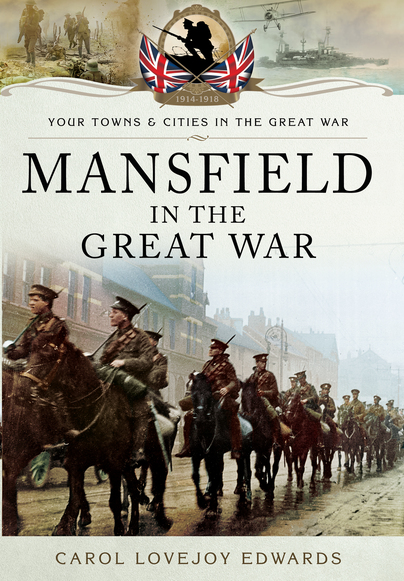 Mansfield in the Great War (ePub)

Add to Basket
You'll be £4.99 closer to your next £10.00 credit when you purchase Mansfield in the Great War. What's this?
Need a currency converter? Check XE.com for live rates

Mansfield was the largest town near the Duke of Portland's home at Welbeck Abbey. The duke and duchess often held house parties for their friends who included the Archduke Franz Ferdinand and Lord Kitchener – one whose death triggered the war and the other who lost his life on a ship halfway through the war. The archduke visited Welbeck Abbey only a few months before his death.

The military camp, built near to the town at Clipstone, became vitally important in the training of troops for the war and at the end of the war as a demob station. Thousands of men descended upon Mansfield to train at the nearby camp. Those men, and thousands of native Mansfield men, left Mansfield for the mud-filled trenches of France and Belgium. Many were miners who were working for the war effort, producing coal for the munitions factories and the military as well as homes, even before signing up.

This is the moving story of those left behind to cope without their men; to cope with the influx of up to 30,000 soldiers; to cope with food shortages and hardships and with the tough living conditions prevalent in the early twentieth century. The book concentrates on the social impact of the war on this particular town and its inhabitants, showing how they coped and the efforts they too made for the war.