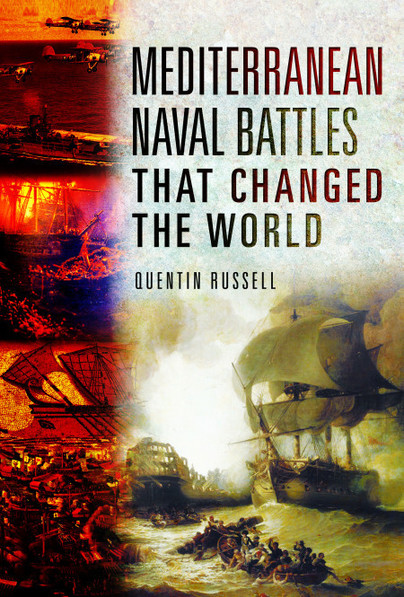 Click here for help on how to download our eBooks
Add to Basket
Add to Wishlist
You'll be £9.98 closer to your next £10.00 credit when you purchase Mediterranean Naval Battles That Changed the World. What's this?
Need a currency converter? Check XE.com for live rates

Focusing on seven decisive naval engagements from the Greek defeat of the Persians at Salamis in the fifth century BC to the Siege of Malta during the Second World War, this book tells the story of the Mediterranean as a theatre of war at sea. Each of these fiercely fought battles were to change the balance of power and shape the course of history. Before telling the story of each battle in detail the history of the balance of naval power in the Mediterranean and the effect of the development of naval architecture and design on the outcomes is outlined: Lepanto was the last major battle fought between galleys; Navarino was the last major battle to be fought entirely by sailing ships; and Cape Matapan (where a young Duke of Edinburgh saw action) was the first operation to exploit the breaking of the Italian naval Enigma codes. The battles included are: Salamis (480 BC), Actium (31 BC), Lepanto (1571), the Nile (aka Aboukir Bay, 1798), Navarino (1827), Cape Matapan 1941 and the Siege of Malta 1940-42.

"This book is well-written and designed for the general reader. Russell has chosen excellent examples of decisive naval engagements and employed appropriate sources in his narratives. The newly drawn maps are especially well-illustrated […] …a most enjoyable book.”

This book is well-written and designed for the general reader. Russell has chosen excellent examples of decisive naval engagements and employed appropriate sources in his narratives. The newly drawn maps are especially well-illustrated and detail the various actions; there are maps for all of the battles. This is a most enjoyable book.

Quentin Russell heads for the Med to take a look at the defining naval battles through the ages.

From the times of the ancient Greeks, Egyptians and Persians, to the battles around Crete, Malta and North Africa in WWII, the Mediterranean has been one of the most hotly fought over Seas in the world. In this wide-ranging book the author takes a look at seven key naval battles through time, starting with the Greeks defeating the Persians at Salamis in 480BC to the Siege of Malta during 1940-1942. The most famous of those included is the Nile at Aboukir Bay in 1798.

First though, there’s a chapter on ancient history, before getting into the detail of Athens versus Persians. What’s good about this book is that it’s not just a dry description of each battle, it sets the scene as to why it was important and how the protagonists prepared for it. There are some photos, which reproduce okay on the plain paper, and custom maps showing the location and order of the fleets. However, it’s the entertaining and clear style that make this book a winner, showing just why the Med was so important to Western Europe.

Dr Russell’s book is highly recommended and it will certainly make TNS members aware of how so much of our modern world depends on Nelson at the Nile and the three major Mediterranean battles that preceded him.

Dr Russell’s book is a well written and highly recommended account of the vagaries of six naval battles taking place over a span of 2000 years which make us realise how much our present world and lives owe to them.

An interesting read, and I now know the history behind the poem that begins:
"The boy stood on the burning deck​
Whence all but he had fled;​
The flame that lit the battle's wreck​
Shone round him o'er the dead"​

This book is basically is all about the importance of control of the Mediterranean sea from ancient times to the modern era.
The author also stresses the changes in the way these battles affected ship design and the tactics of naval warfare.
​
These seven battles altered the balance of power in the Mediterranean theatre and shaped the course of history. Interestingly the battle of Lepanto was the last time fleets of galleys fought against each other and Navarino was the last battle fought entirely between ships under sail.

A good read and if you want to know about the poem you will have to read the book !

An interesting book which takes a slightly different approach to many containing descriptions of naval battles, but one which gives the reader a fuller appreciation of how a single naval battle could ‘change the world’.