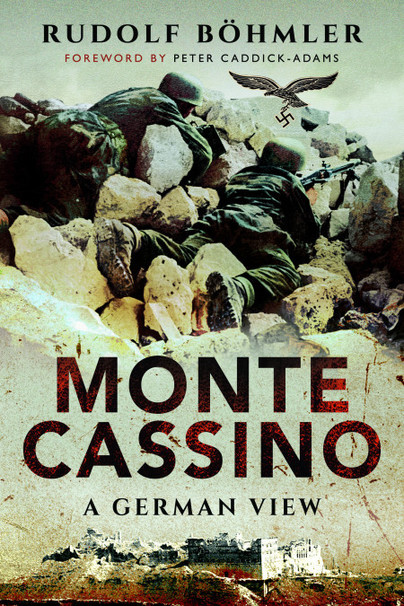 Add to Basket
Add to Wishlist
You'll be £16.99 closer to your next £10.00 credit when you purchase Monte Cassino. What's this?
+£4.50 UK Delivery or free UK delivery if order is over £40
(click here for international delivery rates)

As a German battalion commander Rudolf Bohmler fought in the front line during the fierce battles fought at Monte Cassino. After the war he wrote this remarkable history, one of the first full-length accounts of this famous and controversial episode in the struggle for Italy. His pioneering work, which has long been out of print, gives a fascinating insight into the battle as it was perceived at the time and as it was portrayed immediately after the war. While his fluent narrative offers a strong German view of the fighting, it also covers the Allied side of the story, at every level, in graphic detail. The climax of his account, his description of the tenacious defence of the town of Cassino and the Monte Cassino abbey by exhausted, outnumbered German troops, has rarely been equalled His book presents a soldiers view of the fighting but it also examines the tactics and planning on both sides. It is essential reading for everyone who is interested in the Cassino battles and the Italian campaign.

"If someone wants to read about the minute details of the tactical battle for Monte Cassino, this is also the book. The author has an uncanny way of moving from large overviews about the campaign to boots on the ground without skipping the proverbial beat. To refer this book to anyone interested in either parts of the campaign is a no-brainer. This is a very well written and detailed look at it"

Seldom was the British/American dogma of delivering overwhelming firepower (air and artillery) as a necessity precursor to infantry assault, better seen than at Monte Cassino. This book demonstrates the German response; small unit defence and where possible counter attack. The Wehrmacht doctrine of devolving tactical decision making to those who were best placed to seize tactical advantage is seen through the eyes and experiences of the author. A gem of a book.

Rudolf Bohmler (1914-1968) was a highly decorated German paratroop officer during the Second World War. He took part in the campaigns in Poland, France, Crete, the Soviet Union and Italy. After the war he compiled this graphic and authoritative account of the Monte Cassino battles in which he served as a battalion commander.