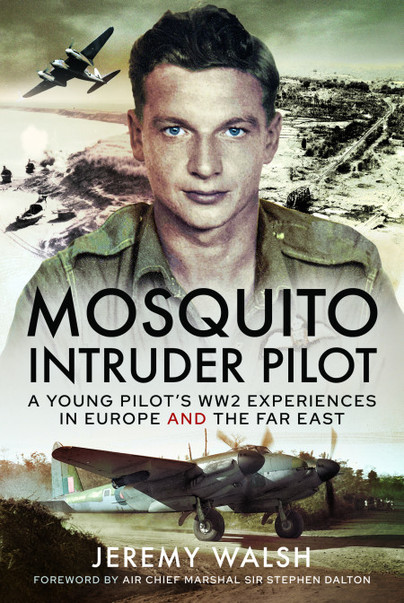 Click here for help on how to download our eBooks
Add to Basket
Add to Wishlist
You'll be £9.98 closer to your next £10.00 credit when you purchase Mosquito Intruder Pilot. What's this?
Need a currency converter? Check XE.com for live rates

Ben Walsh lied about his age to join the RAF, determined to play his part in the Second World War. He volunteered to be an intruder pilot, flying low level operations in the dark. Initially flying ops in Douglas Boston Intruder IIs, he then converted to the legendary de Havilland Mosquito FB VI. Ben flew ops for three years, starting in the skies over with Europe with 418 (RCAF) Squadron, then ferrying one of the first Mosquito FB VIs to India before flying in the Burma campaign with 27 Squadron (under Wing Commander Nicolson VC) and finally with 45 Squadron.

The Mosquito developed problems in the severe climate it encountered in the Far East which resulted in the aircraft being temporarily grounded in November 1944. This saw Ben undertaking thirteen operational sorties in venerable Tiger Moths in the Arakan.

Although Ben survived belly landings, crashes, enemy fire and engine failures, the strain of combat operations took its toll on the still-young pilot. He and his navigator asked to be removed from operations, but their request was denied, both being threatened with court martial.

By the end of the war when still only 21 years old, Ben was suffering from a nervous condition known as ‘the twitch’. His confidence and health were restored by the young woman who had been his pen friend through the war, who became his wife and the mother of the man who has compiled this dramatic and moving story – Jeremy Walsh.

Throughout the war, Ben maintained a ‘Roll of Honour’ in his photograph album, memorializing his friends and colleagues who lost their lives. That album forms the backdrop to this important biography, which is based on Ben’s own recollections, his logbook and the notes he kept through the war. Mosquito Intruder Pilot is Ben’s story.


Mosquito Intruder Pilot is written by Jeremy Walsh. This book focuses on Ben Walsh. He was not completely honest about his age when he joined the war effort. This story is carefully crafted through personal research, oral family remembrances, and sifting through war records. I always love learning about those who have fought in our wars. They all have a story to tell. Ben saw a lot in his war action especially being so young. We get to see the adventures through his son's eyes and official records.

This is the story of a brave man, Ben Walsh, who lied about his age so he could join the war effort. Like so many others who felt they must fight for their country but we're ‘officially’ too young. Born and brought up in Lancashire he had no experience of life outside the county. Joining the RAF seemed a great adventure.
The story is told by his son and who has done a tremendous amount of research using personal records, official documents, and his father's experiences. The text is enhanced by a series of maps to help follow the aircrew's missions.
It describes, in detail, the life in which these young men lived with loss and death at an alarming rate. It's well put together and an interesting read for those of us interested in this period of history.

This is a fascinating tale of a young boy who lied about his age in order to join the RAF in 1941 getting his wings 8 weeks after turning 18 and about a year before he first drove a car.. Ben Walsh's story is told by his son Jeremy who has done an excellent job bringing together official records, personal documents and recollections from his father before his death in 2008. Unfortunately it probably represent a large number of those unsung heros who were motivated to volunteer by a strong sense of duty, served their country well and honorably but without proper recognition and were left at the end of the war with the scars of what we now recognise as PTSD. Ben was certainly one of these specialising in low level missions into enemy territory often under the cover of darkness. Starting with flights from the south of England into France using Boston Intruders graduating to the De Haviland Mosquito one of which he then ferries to India as he moved into the Burma campaign. As if life was not hazardous enough flying at tree top height through mountainous jungle with the threat of enemy fire we then learn of the structural problems which beset the wooden air frame of the Mosquito operating in the Far East heat and humidity. Catastrophic failure of critical glued joints were attributed to many aircraft breaking up in flight with the loss of all aboard.
Jeremy Walsh has done a masterful job chronicling his fathers wartime career weaving together the technical details of both aircraft and the mission logistics as well as the human story of a young boy a long way from home living in difficult circumstances trying to cope with the stresses of an unbelievably hazardous job. Ben kept a "Roll of Honour" in his photo album which was his tally of friends and colleagues doing a similar job but whose luck ran out. It is hard to imagine the thoughts and feelings of a young 19 or 20 year old constantly updating this roster with the certainty his time would be just round the corner.
I would certainly recommend this book not just for those interested in WW2 tales but for any reader who wants an insight into what war really means for those brave enough to become combatants.

A interesting read on the life of an RAF pilot during WW2. The trials and dangers he faced and overcame on a daily basis was truly inspiring. His recovery following the end of the war was truly making.

This story of a young intruder pilot’s war is revealed by JEREMY WALSH through his father’s own words. Jeremy was commissioned as an officer in the RAF, studied aeronautical engineering at university and trained to be a pilot.