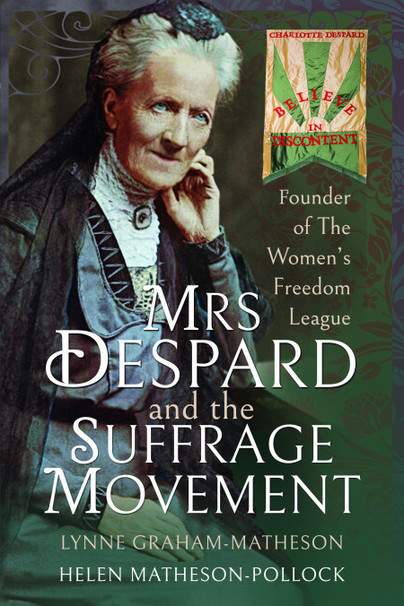 Founder of The Women's Freedom League

An article written by Lynne Graham-Matheson for Dan Snow's History Hit: 'A Force for Social Reform: Who Was Mrs Despard?'

You'll be £14.99 closer to your next £10.00 credit when you purchase Mrs Despard and The Suffrage Movement. What's this?
+£4.50 UK Delivery or free UK delivery if order is over £35
(click here for international delivery rates)

Order within the next 10 hours, 9 minutes to get your order processed the next working day!

Charlotte Despard, social reformer and suffragette, was always known as Mrs Despard, never Charlotte. Her name should be synonymous with those of Emmeline Pankhurst and Millicent Fawcett. Instead, she remains overlooked.

Born in 1844, Charlotte’s childhood was difficult: she found solace in great literature, identifying with Milton and the romantic words of Shelley. She married Maximillian Despard and had the opportunity to explore the world and try her hand at a career as a novelist.

Widowed in her early 40s, her money and status allowed her to live a life of surprising freedom for a woman of her time. Charlotte devoted her life to improving the lot of the poor and moved to live among them in the London slums. She fought for better and fairer living/working conditions for all, supporting adult suffrage before becoming heavily involved in the fight for votes for women. She joined Emmeline Pankhurst’s Women’s Social and Political Union and when that organisation split in 1907 co-founded the Women’s Freedom League, becoming its first, much loved, president. She also served as editor and major contributor to its newspaper, The Vote. When suffrage activities were largely suspended after the outbreak of WW1 in 1914, she returned to her Irish roots and moved to Dublin to support the fight for Irish home rule. After some women were enfranchised in 1918 she tried to capitalise on the upturn for women’s political freedom by (unsuccessfully) running for Parliament.

Charlotte’s political and public career ended tragically when she died in Belfast aged 95, penniless and alone, having given all her money to helping those less fortunate. Her quiet legacy continues to be felt to this day in causes supporting the rights of women and children.

I had never heard of Mrs. Despard so it was interesting to get to know her in this book. The author's writing was great and you could tell that they did the research.

Mrs Despard and the Suffrage Movement: Founder of the Women’s Freedom League was such a brilliant book. Its a period of history especially women’s history that I find fascinating and would like to know more about.

Mrs Despard was such a extraordinary, smart and talented woman who did so much for the Women’s Suffrage Movement. This book was utterly fascinating, well-written, well-researched, thoroughly engaging, informative and completely enjoyable. I would definitely recommend this to anyone who is interested in women’s history.

A thoroughly good read, a book where you learn a lot, and one that I hope could be read by more people than it will seem to. The book is very comprehensive and looks at Despard’s life from the beginning and upbringing, through to her marriage, why she became a suffragette, and her life supporting women, the working class and her campaigns to help in Ireland. The book is very well written by this mother and daughter authors, which went into excellent detail but kept the story alive.

Biography of an extraordinary woman who fought for better conditions for the poor and especially the rights of women. I don't understand the reference to "identifying with Milton's Satan", but other than that Helen and Lynne bring Charlotte Despard rightly to our attention at a time when the only suffragette that really springs to mind is Emmeline Pankhurst...

I’ve read widely about the Suffragists/Suffragettes and their fight for the vote but somehow Mrs Despard, a quite remarkable woman, had eluded me and it was a real joy to discover her in this comprehensive biography. She was at the heart of the movement for women’s suffrage as well as a host of other philanthropic ventures, and later in life became a key player in Irish liberation politics. She knew just about everyone of importance in the causes she devoted her life too and led a truly adventurous and endlessly fascinating life. And yet she is not a household name by any means and I hope this well-researched biography will change that. The book has its faults – the chronology is a little muddled at times and there is some repetition – but these faults can surely be forgiven given Mrs Despard’s importance and relevance to early women’s history and the need to make her more visible. An absorbing and compelling read, from which I learnt a lot.

If you're interested in learning about women's history and the suffragette movement then pick this up because this book was fabulous.

Mrs Despard and The Suffrage Movement is a well researched and enlightening book about not only Mrs Despard, but the women's rights movent in general. She's often overlooked, but she did a lot of work, not only for women, but also workers and the poor. I wish more people knew about her.

Throughout my women's studies education I was dismayed when I read this book that I had not known of Mrs. Despard prior to reading this book. She is a fascinating important part of women's history ! She was the key central figure of our history of the women's movement. A amazing woman ahead of her time of independence and knowledge. She was driven to fight for women's rights and for fairness for all women in a time of a strict male dominated society where her work at times had the result of her being imprisoned and treated like a pariah in society. She bravely led hunger strikes in prison and was force fed against her will. She was central in the creation of the Women’s Freedom League which remained in existence until 1961. She fought for women her entire adult life and even in failing health in her later years she did not deter from her goals.
She was known for giving amazing speeches and putting on numerous demonstrations no matter what she was up against at the time. Her courage both help create and galvanize the suffrage movement. She is a great part of women's history and this book should be utilized in all women's studies classes. I thank the author for this outstanding body of work and am grateful to have read about this brilliant woman . This book should be taught in all women's history courses.

I think the cover is very striking, the image of Mrs Despard with the demonstration banner in the background. The cover made me want to know more about the rather finely dressed lady on the cover. I wanted to know why I hadn’t heard her name widely used in connection to the suffrage movement along with the others I knew rather well such as Emmeline Pankhurst and her daughters Sylvia & Christabel. I was also familiar with the tragic story of Emily Wilding-Davison and had heard other names but not the name of Mrs Despard. On the cover Mrs Charlotte Despard looks like a stern, wealthy woman and after reading the book I have learnt that she wasn’t afraid of speaking out and going against what others thought... To sum up I found this book a great read about an amazing woman who inspired other to fight for their rights.