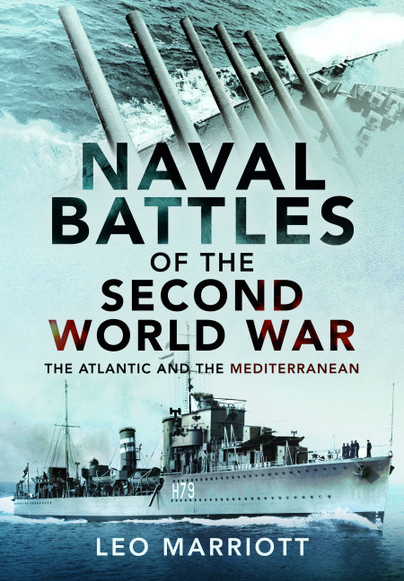 The Atlantic and the Mediterranean

Add to Basket
Add to Wishlist
You'll be £20.00 closer to your next £10.00 credit when you purchase Naval Battles of the Second World War. What's this?
+£4.50 UK Delivery or free UK delivery if order is over £40
(click here for international delivery rates)

The Second World War was a truly global conflict and maritime power played a major role in every theatre of operations. Land campaigns depended on supplies transported by sea, and victory or defeat depended on the outcome of naval battles. So Leo Marriott’s highly illustrated two-volume account of the struggle sets naval actions in the wider strategic context as well as giving graphic accounts of what happened in each engagement.

This first volume concentrates on the Royal Navy’s confrontation with the ships and submarines of the German Kriegsmarine during the Battle of the Atlantic, the Arctic convoys and the struggle across the Mediterranean against the Italian navy to supply the opposing armies in North Africa. The Battle of the River Plate, the pursuit of the Bismarck, the PQ17 convoy to the Soviet Union and Operation Pedestal, the most famous convoy sent to relieve Malta, are among the episodes described in vivid detail and illustrated with a selection of striking photographs.

This concise but wide-ranging introduction to the naval war emphasizes the sheer scale of the conflict in every sea and shows the direct impact of each naval battle on the course of the war.

"...a launching point for learning about the war at sea during World War II."

If you have obtained copies of your ancestor’s Royal Navy service record for WW2, it will provide you with a list of ships served upon. But that should be only the beginning of your research. You will want to know whether these ships took part in any of the naval battles of the war while your ancestor was on board, and this is where Leo Marriott’s book will help you. Every chapter describes a named naval battle and opens with a box detailing the identities of the Allied ships involved as well as the date and location. The book also contains maps of engagements, and over one hundred wartime photos mainly of ships at sea, in action and in distress. The chapters are necessarily brief given the large task which the author has set for himself, but each one begins with a background to the engagement to set the scene. As a whole, the book is a helpful summary of wartime naval actions. This book is the first of two volumes focusing on the battles in the Atlantic and north west Europe, and on the Mediterranean. The second volume, due for publication in June, will cover the Pacific and Far East.

I enjoyed all the facts and details along with many good photographs and I especially enjoyed the appendix at the back of the book listing all the warships involved I would recommend this book but if you already have a sound knowledge of naval battles it might not be for you.

Leo Marriot is a prolific author with many titles published on military, naval and aviation history. This volume details the Royal Navy’s confrontation with the German Kriegsmarine, the navy of Nazi Germany 1939-1945 across some select engagements. The author takes the reader to the heart of the Battle of the Atlantic, the frozen seas navigated by the Arctic convoys and the disaster of convoy PQ 17. There is a detailed look at Operation Pedestal, the convoy that many say saved Malta. Other engagements include the Battle of the River Plate, Operation Torch, Matapan and many other actions against the Italian Navy in the Mediterranean. The author has done a great job (in the opinion of this reviewer at least!) and gives the reader a concise narrative description of the engagements but still provides vivid detail. The text is supported by excellent photographs and clear mapping. A good glossary of terms (very useful for the uninitiated) and an large appendix gives brief details of all the warships (less submarines) in the battle narratives. Overall this work clearly shows the scale of the sea battles and its effect on the conduct of the war and is highly recommended for those with an interest in WW2 naval history.

Marriott also includes a helpful appendix listing the ships involved in all these operations, though his bibliography could have been significantly beefed up. But quibbles aside, I enjoyed my evening reading about World War II naval battles, and I look forward to reading Marriott’s volume on the Pacific theatre.