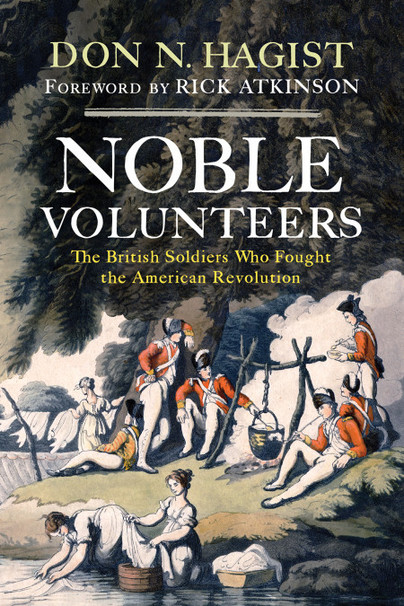 The British Soldiers Who Fought the American Revolution

Add to Basket
Add to Wishlist
You'll be £29.95 closer to your next £10.00 credit when you purchase Noble Volunteers. What's this?
+£4.50 UK Delivery or free UK delivery if order is over £35
(click here for international delivery rates)

Redcoats. For Americans, the word brings to mind a occupying army that attempted to crush a revolution against king and country. For centuries these soldiers have remained hidden despite their major role in one of the greatest events in world history. There was more to these men than their red uniforms, but the individuals who formed the ranks are seldom described in any detail in historical literature, leaving unanswered questions. Who were they? Why did they join the army? Where did they go when the war was over? In Noble Volunteers: The British Soldiers Who Fought the American Revolution, Don N. Hagist brings life to these soldiers, describing the training, experiences, and outcomes of British soldiers who fought during the Revolution. Drawing on thousands of military records and other primary sources in British, American, and Canadian archives, and the writings of dozens of officers and soldiers, Noble Volunteers shows how a peacetime army responded to the onset of war, how professional soldiers adapted quickly and effectively to become tactically dominant, and what became of the thousands of career soldiers once the war was over. In this historical tour de force, introduced by Pulitzer Prize winner Rick Atkinson, Hagist dispels long-held myths, revealing how remarkably diverse British soldiers were. They represented a variety of ages, nationalities, and socioeconomic backgrounds, and many had joined the army as a peacetime career, only to find themselves fighting a war on another continent in often brutal conditions. Against the sweeping backdrop of the war, Hagist directs his focus on the small picture, illuminating the moments in an individual soldier’s life—those hours spent nursing a fever while standing sentry in the bitter cold, or writing a letter to a wife back home. What emerges from these vignettes is the understanding that while these were “common” soldiers, each soldier was completely unique, for, as Hagist writes, “There was no ‘typical’ British soldier.”