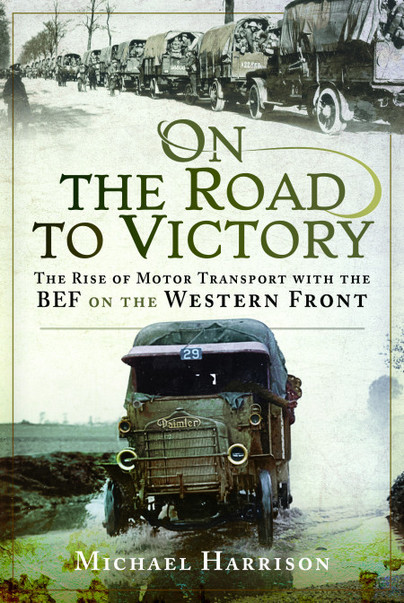 On the Road to Victory (ePub)

Click here for help on how to download our eBooks
Add to Basket
Add to Wishlist
You'll be £4.99 closer to your next £10.00 credit when you purchase On the Road to Victory. What's this?
Need a currency converter? Check XE.com for live rates

It has been excellent to see just how many new avenues have been researched and written on the Great War. This book is another fantastic resource, and work of interest... The book is complimented by many wonderful photographs and images.
Overall, a splendid book which opens up many new avenues in relation to the transport process on the Western Front.

... On the Road to Victory is informative, interesting and a treat in store for Great War buffs.

'This is an interesting and readable volume that is informative about the role of MT on the Western Front'.

The impact of the industrial revolution on warfare at the start of the Twentieth Century is well recorded. Books on the wholesale slaughter in the trenches of the Great War abound and the focus is on the machine gun and barbed wire. But World War 1 began shortly after the internal combustion engine appeared as a reliable means of powering motor vehicles.
In “On the Road to Victory - The rise of Motor Transport with the BEF on the Western Front,” Michael Harrison takes an intriguing look at the early days of “MT.” This is a record of how Motor Transport alongside the more traditional Horse Transport made a significant impact on logistics on the Western Front. But this is no dry text. It is a very human story and Michael Harrison’s book is a fitting tribute to the men and women of the Army Service Corps.
The story starts with civilian vehicles (and often their drivers) being pressed into service as the Great War started. As the War progressed and it became clear that MT was much more efficient than HT so the number of motor vehicles rapidly grew. Congestion quickly became a problem and many of the roads feeding the front had to adapt a one way system to keep the traffic flowing and the road surface serviceable.
The enormous engineering effort to keep the vehicles running and the roads usable is recorded in great detail but primarily this is a book about people. Those that built, policed and maintained the roads feature and much of the book is devoted to the heroic efforts of the drivers who, often under fire from the enemy, worked long and punishing hours to keep the supply chain intact.
The book is populated with numerous black and white photographs from the era, many being seen for the first time. There are several artist illustrations showing the principle vehicles.
This book will appeal to military historians interested in the First World War as this particular subject is not very well recorded elsewhere. Model makers will find many photographs that will inspire dioramas. Written in a non-academic style this book is an easy and fascinating read and is recommended to all that have an interest in this turbulent time.

I wasn’t expecting to really enjoy this book, mainly because I didn’t realise how many motorised vehicles were used by the British during World War One and secondly I’m not the biggest fan of motor vehicles. But this book was a really big eye opener to me. I knew that many of the countries going to war were not very mechanised with the exception of the British army, but when you read this book the sheer volume of vehicles used in this case by the BEF is enormous. Yes they did use lots of horse power during the war, which had been my impression but it turns out the British used a lot of motorised vehicles. Although this book is mainly about vans and working vehicles, I find it staggering because when you look at the size and thinness of the wheels it is hard to fathom how they managed other than to only keep to concrete roads, because I imagine many would have got stuck in all the mud.

This was a fascinating read throughout, along with being a well written book as it would be published by Pen and Sword Books. The author Michael Harrison has included a great many pictures, illustrations, cartoons, advertisements and photos into the book, they are all first class and really do liven up an excellent book. On a final note, having just read another fine Pen and Sword book, Images of War – Operation Dynamo. I can now see where it seems most of the vehicles ended up having to be used to transport soldiers back to Dunkirk in order to get back to Britain. I will give this book an excellent 4.5 stars out of 5.

With so many technical innovations, it is perhaps understandable that the impact of motor transport during The Great War has received such poor coverage. The introduction of motor transport with the BEF made a critical contribution to eventual victory. – Most Highly Recommended.

WW1 was a period of great technological change and the British Army was one of the front runners who made such good use of the latest logistic systems. A very interesting read on a rather unsung element of the BEF in WW1 on the Western Front.