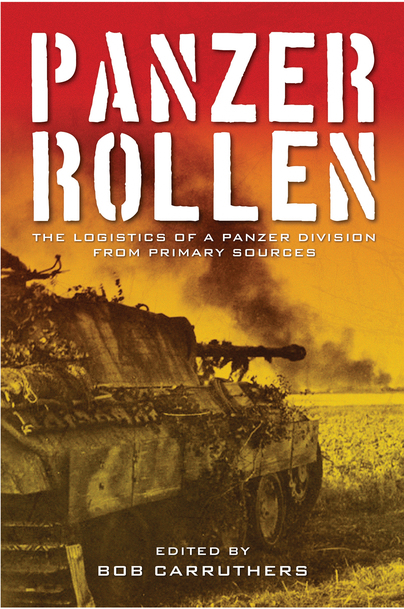 Add to Basket
Add to Wishlist
You'll be £12.99 closer to your next £10.00 credit when you purchase Panzer Rollen. What's this?
+£4.50 UK Delivery or free UK delivery if order is over £35
(click here for international delivery rates)

Panzer Rollen provides an insightful look in to the workings of the Military Intelligence Service that was so invaluable in shaping both the strategy and tactics of the Allied forces during the Second World War.

Captured German field manuals translated and published by the US Military Intelligence Division are crucial in offering a perception of the intelligence provided to Allied fighters. The two volumes gathered together in this publication were originally published by the German War Office and therefore are particularly valuable, as they also provide a rare glimpse in to the methodology underlying the operation of an armoured division from the German perspective. Comprising of two supplementary field manuals, this book is essential reading for any military history enthusiast.

In the early stages of World War II, no major power possessed the skills or resources to halt the German armoured offensives. These powerful thrusts made by the Third Reich often wreaked havoc on British, French, and Soviet lines. Characterised by rapid pincer movements to encircle the enemy, German armoured tactics demonstrated the importance of tanks in the modern battlefield for the first time in military history. In order to understand what made German panzer divisions so effective, one must delve into the specific procedures that all successful German commanders followed. Drawing from captured German field manuals translated by the US Military Intelligence Division, Carruthers presents to us a well-organised book that explains how armour brigades cooperated with motorised / mechanised infantry units and other organic elements within the division.

According to German military thinking pioneered by General Heinz Guderian, panzers served as the spearhead of offensive operations. Indeed, rather than as static defensive assets, the tanks had to penetrate enemy defences using overwhelming force concentration while being supported by motorised artillery, armoured reconnaissance units, signal battalions, and of course, the infantry. One can appreciate just how precise the German field manuals were as they specified everything from duration of rest during long marches to speed of vehicles depending on time of day. I believe that this book can serve as a guide for those who wish to re-enact historical battles or for those who enjoy tabletop games.

While the book does not go much further beyond the texts drawn from the works of the aforementioned US Military Intelligence Division, one can utilise this succinct source of information in many different ways. For students of military history seeking to understand the resounding successes of the German panzers, this book will no doubt provide ample explanation. For current members of the military service, this work can give valuable insights and practical knowhow to formulate effective battlefield tactics.

A really interesting book to read!

This book is based on two intelligence reports that were produced from translations of captured German documents. The Panzer Division was constrained by logistics more often than supported. This primary source information provides a unique insight. - Highly Recommended

This is a must have text for those enjoy reading about the various armor battles across modern history as well as those of the Second World War. I highly recommend this book as a primer for study potentially for those who dream of being professionals or those who study tank warfare. It is a great read and hopefully will continue as a niche with more examples being produced. They provide an in depth look of what functions are critical to a larger operation and how all of these divergent elements are joined into what now is called joint combat groups in today’s modern warfare. Certainly a superb edition to join your library of armor books of any period. I thoroughly enjoyed it cover to cover.

This is a fascinating little paperback, as it reproduces wartime US Intelligence translations of 2 original German documents. Both are manuals published for German units, but once captured, US Intelligence had them translated and then shared them with US unit commanders, to help them appreciate how the German Panzer units were operated... I find it fascinating to read original documents such as these so I enjoy seeing modern versions such as this. One for the military historian with any interest in the Panzers of WW2 and also a handy reference for wargamers I'd suggest.