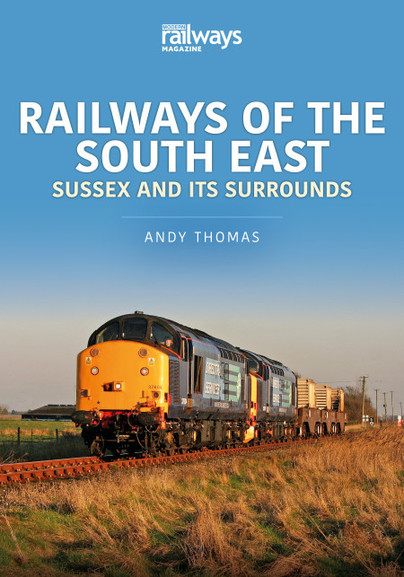 Railways of the South East (Paperback)

Sussex and its Surrounds

Preorder
Add to Wishlist
You'll be £11.99 closer to your next £10.00 credit when you purchase Railways of the South East. What's this?
+£4.50 UK Delivery or free UK delivery if order is over £35
(click here for international delivery rates)

The first of two volumes covering the railways of the South East, this book focuses mainly on Sussex but also includes small sections of Surrey and Kent. It concentrates on locomotive-hauled traffic and details a wide range of trains including inter-regional passenger, parcels and mail, fuel, heavy freight, test trains, engineers traffic, Rail Head Treatment Trains, Snow and Ice Treatment Trains, railtour excursions and the luxurious Orient Express. An extensive range of different liveries, many now consigned to history on the main line, are shown.

There is also a small selection of DEMUs in some of the areas they once operated.

Over 180 colour photographs, the vast majority of which have never been published before, serve to illustrate some of the wonderful countryside to be found in this corner of England as well as the trains that run through it. They are complemented by informative captions detailing not only the trains themselves but also some of the infrastructure and features found along the routes covered.

Andy Thomas initially lived the majority of his life in Kent and then hopped over the border into East Sussex. He was educated locally and went on to college to specialise in business studies before entering the finance department of a local council. He has spent his entire career to date in local government, working for two neighbouring borough councils, the last 30 years of it in an investigative role of revenue protection and latterly running the specialised section. His interest in railways began at a young age and has remained firmly as his prime hobby and interest through life. Photography, mainly of railways, has developed over time and he has had a few photographs in various railway magazines over the years.