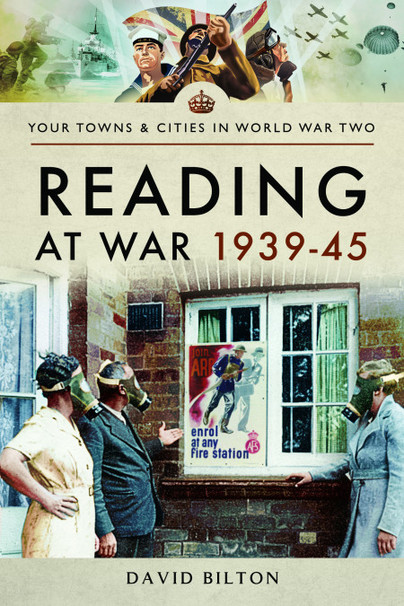 Click here for help on how to download our eBooks
Add to Basket
Add to Wishlist
You'll be £4.99 closer to your next £10.00 credit when you purchase Reading at War 1939–45. What's this?
Need a currency converter? Check XE.com for live rates

As in the Great War, Reading in the Second World War was a town permanently in a state of flux. So close to London, so easily pinpointed by its proximity to the Thames, with railway lines converging near the town centre and with much of the town’s industry geared up to essential war work, it was an obvious target for the German Luftwaffe when the war broke out. Knowing this, the council had set up an efficient Civil Defence system aided by government finance. Fortunately for the citizens, although they were bombed on many occasions, only one raid had any significant impact.

The book covers the daily life of a town ready for the worst, but one that continued with its daily life and just got on with its efforts to aid the war effort. The book is profusely illustrated with photographs, illustrations and human interest stories. Much of the material used has not been seen since the war so it provides a valuable and unique insight into daily life of the town.

Journal for the Pillbox Study Group

David Bilton has collated much of the information from local history books and copies of The Standard, the town’s newspaper. My grandparents and parents all lived in Reading, so this book had particular interest to me. As I read the book I was eager to find details about familiar place names and establishments. Street names from my past constantly popped off the pages as I placed them against my childhood memories.

I was fascinated by the quantity of money-raising campaigns and collections of goods which continued throughout the war years. Of particular note was raising money for Spitfire aircraft, boats and tanks as well as funds for prisoners of war, hospitals and many more.

This is definitely worth reading if you have an interest in the town and it will give me much to talk about with my parents, who I am sure will also be interested in this book.

This book is a thicker book than most in the series, but then this is no surprise when you consider how close Reading is to London, it would have had to deal with similar build up and going through war process as London being located close to the Thames. Reading received much government support due to it being industrially important for the war effort and being so close to London. But the book shows that the community still had to cope even with ‘local’ matters just like any other town. This little all the other books in the series have fascinating bits of information, for instance this book shows the details for what to do out in a blackout and a poem about life in the blitz.

I’ve found with this book in particular, it was like reading from the local paper as it had all the quirky and odd bits of information you’d find in a local newspaper. But yet again in this series it is very well written by a top notch writer. It’s hard for me to fault these books because they are very well written and as a fan of local history, I love these. It was nice to read such a weighty book packed with good reading which is complemented with a wide array of photos, pictures and diagrams. I would happily recommend this to anyone especially if you love good local history. 5 Stars.

The very popular “Your Towns & Cities At War” is building a unique collection of volumes providing a detailed local view of all parts of the British Isles during WWII. This new book provides the story of Reading during WWII, its proximity to London and communications links – Very Highly Recommended.

The latest title in Pen and Sword's excellent towns and cities in world war two series, as David Bilton takes an in-depth look at how the people of Reading coped during the conflict. Interesting to read that suffering from German Air Raids was apparently minimal, and the photographs, as always, are fascinating to see. A brilliant series.