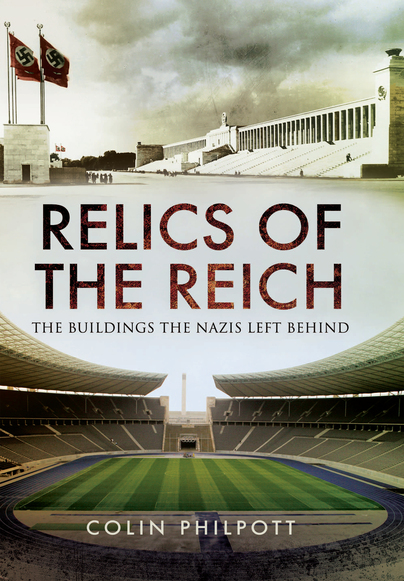 Relics of the Reich (ePub)

The Buildings The Nazis Left Behind

You'll be £4.99 closer to your next £10.00 credit when you purchase Relics of the Reich. What's this?
Need a currency converter? Check XE.com for live rates

Relics of the Reich is the story of what happened to the buildings the Nazis left behind. Hitler’s Reich may have been defeated in 1945 but many buildings, military installations and other sites remained. At the end of the War, some were obliterated by the victorious Allies but others survived.

For almost fifty years, these were left crumbling and ignored with post-war and divided Germany unsure what to do with them, often fearful that they might become shrines for neo-Nazis. Since the early 1990s, Germans have come to terms with these iconic sites and their uncomfortable part. Some sites are even listed buildings.

Relics of the Reich visits many of the buildings and structures built or adapted by the Nazis and looks at what has happened since 1945 to try to discover what it tells us about Germany’s attitude to Nazism now.

It also acts as a commemoration of mankind’s deliverance from a dark decade and serves as renewal of our commitment to ensure history does not repeat itself.

This book is about the architectural inheritance of the Nazi period. Recently
Germany has come to terms with its Nazi past and now these buildings are
often protected sites. Some of the sites are termed “perpetrator sites” and
others “victim sites”. Both categories are now becoming tourist attractions in
their own way.
The stories of many symbolic Nazi buildings are described in this tome. Often,
there are comparisons between then and now – which makes this book very
exciting to read. The Reich was defeated in 1945 but many military
installations, arenas and other architecture have remained. Naturally some
were destroyed during the war but there is still a significant number in various
states of repair.
Since the reunification of Germany these buildings have attracted numerous
visitors from many nationalities. So much so that there is almost a dedicated
section of the tourist industry. Some such as Berchtesgarden and the
remodelled Reichstag have massive numbers of tourists every year.
This work has been painstakingly researched and provides an excellent
review as to what has survived and the histories of these structures. There are
numerous chapters each dealing with a stage in the history of Nazi Germany.
While the author has compiled this volume with regards to what has survived I
really feel that this book is going to become more popular as a “tourist guide”
to Nazi sites. Indeed, it is so good you can plan your own itinerary via it and
this dispenses with expensive tour guides taking you from site to site.
I found this book very impressive. After many years of conducting military
history research I was very pleased that the author has taken the time to
compose a book on this topic. Yes - I had heard of many of the sites but not
visited them. This tome acts as your armchair tourist guide and enthrals you to
go to the sites in person. What else can I say but this is an outstanding guide
to surviving Nazi architecture which is more likely to become the leading
English language tourist guide to them!

A good book and I am pleased that I read it. It is probably not going to be at the top of many people's reading lists, and certainly wasn't at mine, however, for anyone interested in the rise of Nazism and also how modern Germany dealt with its history, I would highly recommend it.

Very much a question of how we come to terms with the past, what must remain an important consideration for many in Germany. I found it a fascinating book to read, and it is well illustrated throughout with photos both old and new views of so many of the places covered in the book.

In a new book by former Director of the National Media Museum Colin Philpott investigates the history and painful legacy of the Third Reich's architectural remains.

COLIN PHILPOTT has a long-standing interest in recent German history and in abandoned buildings and venues. His first book A Place in History, looking
at the impact on places where news stories happened in twentieth century Britain, was
published in 2012. His drama The Last Match about the last day of peace before World War Two, was first performed in
2014.
He is a former Director of the National Media Museum and was a BBC programme maker
and journalist for 25 years. He also works as a non-executive director, a producer
on creative and media projects and as a radio and event presenter.
He lives in Yorkshire.