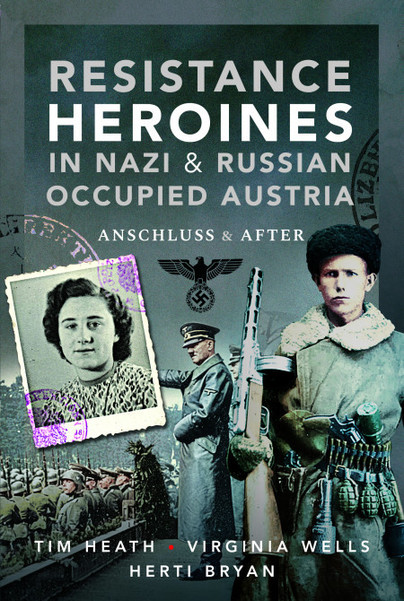 Click here for help on how to download our eBooks
Add to Basket
Add to Wishlist
You'll be £4.99 closer to your next £10.00 credit when you purchase Resistance Heroines in Nazi- and Russian-Occupied Austria. What's this?
Need a currency converter? Check XE.com for live rates


WW2 is my favorite subject to learn about. So I really enjoyed this book. If you like WW2 themed books then this book is for you.

This book was such a fascinating and informative read! Various women share their experince of the Nazi invasion into Austria when they were children. I found this to be an especially emotional read since my great grandfather was born in Graz, Austria. He immigrated to America a little before WWI, but his daughter, my grandmother, was born around the time that these women were and would have been right there (one woman's experience shared actually was in Graz!) With my grandmother's Jewish heritage though, her experience likely would have been more tragic. The women who share their experiences did not have Jewish heritage, but were still heavily affected by these events. They were forced to join the children Nazi groups, but showed resistance to this ideology they did not believe in, in meaningful ways as they grew older. In addition to the experiences shared, a lot of background information is shared about what was occurring generally, starting with the anschluss to the end of the war and Russian occupation. Despite having studied the period previously, I was unaware of the devastation that came with Russian occupation and how that time was viewed as worse than when the Nazis were in charge. The events were horrific, animalistic, and terribly tragic. Overall, this is such a moving and engaging book. Thank you to the authors for sharing their experiences of heartache and tragedy during their youth to help enlighten more recent generations on the experiences that were had at the time.

We all know of the atrocities that occurred during WWII, this book tells of the determination and gumption of three young girls in Austria. The three women recall their poignant stories and near escapes in this truly inspiring book. I took a while to read this because the subject matter is heavy at times. I would recommend to anyone who loves history or kick ass empowering stories.

I thoroughly enjoyed this book, it was well researched and very interesting. I was completely invested in the lives of these women.
This book tells Herti Bryans story and those of Milly Keller and Hilde Schubert who describe their experiences during the war, Incredible first hand accounts of their thoughts, feels and a reflection on their courage and bravery.

I loved that the focus of this was on the female perspective of wartime life and resistance in occupied Austria. It’s so great when I get to read a war book focus on female activism during the war. It provided a variety of perspectives of dissent during the war. Written from the memoirs of people who lived through WWII in Austria. This book gives a painful yet ultimately hopeful insight into Austria during WWII and the atrocities that they lived through , living through German occupation and then to suffer the things the Russians put them through, it’s a hard read, but a necessary one. I wholeheartedly recommend this book, for education, for remembering and to gain more insight into how much women did in the war, so hidden for so long.

I greatly enjoyed the book, it was well researched and interesting. I found myself almost invested in finding out what had happened with the women featured in the book.

This is the harrowing and true story of Herti Bryan, of growing up during Hitler’s regime. Her views and experiences from a young child on into her teen years, how she grew to fight back and resist. This is unlike other stories I have read and parts of it are so horrifying and heartbreaking, it was hard to read. For Herti to make it through to the other side and be able to stand strong and live a vibrant life shows such strength. Thank you to Herti and the other women in this book, Milly Keller and Hilde Schubert for sharing their stories, we need more stories like this. May we never forget.

The authors present a fascinating look at the resistance movement in Austria during the years of Nazi occupation.