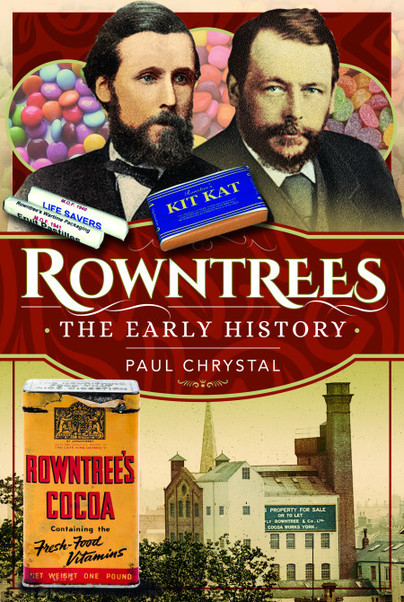 Click here for help on how to download our eBooks
Add to Basket
Add to Wishlist
You'll be £4.99 closer to your next £10.00 credit when you purchase Rowntree's. What's this?
Need a currency converter? Check XE.com for live rates

If one of your ancestors worked for Rowntree’s (or even one of their early competitors), attended one of the many schools with which the family were associated, or perhaps lived at New Earswick, the garden village financed by Joseph Rowntree’s generous donations, then this book is likely to be of interest. I suspect too that many family historians with other connections to York will also find it revealing for what it tells us about the city and its inhabitants.

The latest title in P&S's series on the businesses that were "born" in the early decades of the industrial revolution looks at chocolate manufacturers the Rowntree family. The brand still appears on some sweets available today, such as fruit pastilles and fruit gums, for example. A fascinating look at a family business through the ages.

Rowntree’s by Paul Chrystal – The Early History is such an interesting book. I knew only a few things about the history of chocolate and its York connections. The great things about this book is that, while talking a lot about the Rowntree family, with a focus on Henry and Joseph, the author also shares lots of interesting details on their competition: Fry’s, Cadbury’s, Mars, and Terry’s.

The chapters are quite small and he looked over all the aspects related to making chocolate in the 19th century and early 20th century. As they were Quakers, their religious views are described in detail too. The business was complex and it went through ups and downs. I like that corporate espionage is mentioned, especially as I wouldn’t have imagined something like this from people who were so moral when it came to their employees and clients.

Henry started the chocolate business, but it wouldn’t have survived without Joseph’s strength and determination. They were involved in charity work, but they did much more than that. Rowntree was one of the companies which developed those gorgeous villages for their workers, with beautiful houses that had gardens and good facilities, with greeneries outside and a park, and a school.

It was lovely to read about that. It was also lovely to read about the decent wages they were giving, on top of pensions, insurance, a doctor was hired to help with any medical needs the employees had. Furthermore, the company’s newspaper, something quite usual today but unknown at that time, offered an insight into what happened at the factory at that point and the author talks about this in sufficient detail.

Advertising was something the Rowntree was not keen to do, as they thought the quality of the product should have been sufficient enough, but as a topic is fascinating. Their views and involvement in the world wars is covered in the book too and, again, it is really interesting.