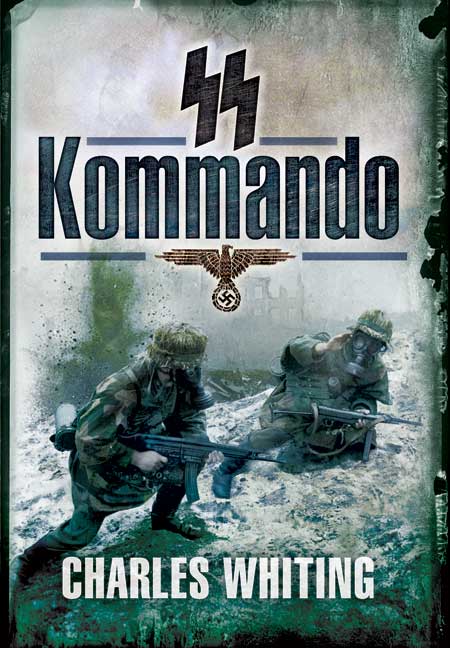 Add to Basket
Add to Wishlist
You'll be £12.99 closer to your next £10.00 credit when you purchase SS Kommando. What's this?
+£4.50 UK Delivery or free UK delivery if order is over £35
(click here for international delivery rates)

The vast number of written accounts studying the British Special Forces in the Second World War overlook the fact that the Germans were actually the first to utilize this unconventional style of warfare. Indeed, two days before the official declaration of war German commando units disguised as Poles had already seized key positions along the frontier, and for three years after this Admiral Canaris’ Brandenburgers, formed long before the British Commandos or American Rangers were dreamed of, played a key role in Hitler’s military operations. Their operations ranged from capturing the bridges across the River Meuse in 1940 to supporting the IRA and Welsh Nationalists to stir up trouble within Britain. Charles Whiting, who interviewed many of the survivors, gives a vivid account of these men and their war.

Charles Whiting wrote his first novel in 1953, aged just twenty-six. He went on to be the world’s most prolific author of military books; he has sold in excess of three million in the UK alone, and his collective works number around 200. Charles also lived abroad for thirty years working in German chemical factories, US fashion companies, newspapers, magazines, universities – as an associate professor and lecturer – and spent a long spell in the US army. He died in 2007.

The vast number of written accounts studying the British Special Forces in WWII overlook the fact that the Germans were actually the first to utilize this unconventional style of warfare. Their operations ranged from capturing the bridges across the River Meuse in 1940 to supporting the IRA and Welsh Nationalists to stir up trouble within Britain.

Germany's special forces were intrinsically involved in the Second World War from before the outbreak of war in 1939 to the last days of conflict in 1945. Members of the Brandenburg force fired the first shots in Poland, two days early. Special Forces played a role in the victories in the west in 1940, rescued Mussolini after his fall from power and kept Hungary in the war on Germany's side.

Whiting's book focuses on the exploits of the various German special units rather than their development or stricture. There is more on the background to the Abwehr's Brandenburg unit than on their SS equivalents but this isn't the main focus of the book.

Whiting's main strength lies in his use of first hand accounts provided by some of the surviving members of the units (including Skorzeny). Despite this reliance on the veterans Whiting a fair few failures, including the famous attempt to assassinate Stalin, Churchill and Roosevelt at Tehran and less well know failures in Egypt and Wales.

There is some confusion over the title of this book - the SS Kommando of the cover is less accurate that the title given inside the test - Kommand, Hitler's Special Forces in the Second World War. Canaris and his Brandenburgers dominate the first third of the book, the SS and especially Otto Skorzeny the rest.

This is an often atmospheric account of some less familiar aspects of the Second World War and a reminder that bold, daring special forces operations were not limited to the Allied side.