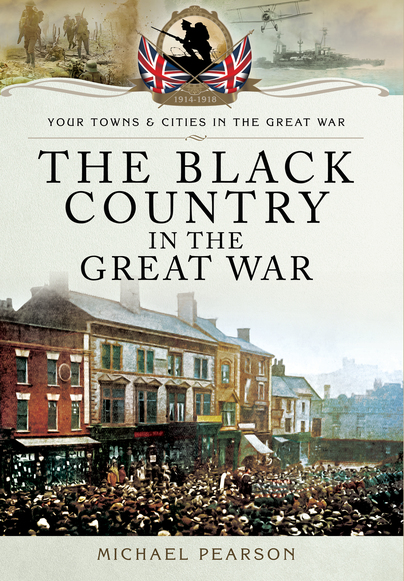 The Black Country in the Great War (ePub)

Click here for help on how to download our eBooks
Add to Basket
Add to Wishlist
You'll be £4.99 closer to your next £10.00 credit when you purchase The Black Country in the Great War. What's this?
Need a currency converter? Check XE.com for live rates

This is not a book about the Great War; it is about life during the war. Changes in people's lives: their work, home, food, entertainment and news. I used original research material including newspapers, to paint a picture of life in the Black Country.

Manufacturing was vital; we were well-equipped to supply the engines of war. The region had motor manufacturers who made aero engines, tanks, guns, munitions and much more. Towards the end of the war the Black Country became one huge munitions works!

Some of the greatest changes were societal, women's role changed massively. Wider social change involved the first steps towards equality between the sexes. By 1918 women could vote and stand as MPs. At work, women became clerks, tram drivers, munitions workers and more. With so many men away, without women the war could not have been won.

This was the first modern conflict, truly the First World War, where troops globally converged, mainly on France and Belgium, to fight a common enemy. It began in August 1914 amid much excitement and the initial months saw the British Army grow hugely. There were those who did not want to fight, their circumstances will be examined, as well as methods used to 'encourage' them to sign up.

The war developed into trench warfare, with heavy casualties, vastly more than thought imaginable. Most Black Country families lost one or more of their loved ones; but there was little time to mourn; in many cases reports were not made public for some time; a well-oiled propaganda machine saw that news did not seriously damage morale.

In 1916 war came to the Black Country through a Zeppelin raid. Its affect was devastating and impacted widely as restrictions were placed on lighting and other measures to minimise the effects of probable future raids. By 1917 the Black Country had to cope with more wounded from the front line. Hospitals were full and further measures were needed to accommodate our returning injured heroes. Treatment, feeding and entertainment for the wounded are all examined. Indeed, generally food supply was of concern from day one of the war. Prices rose, supply became short, there were riots protesting about 'profiteering' and eventually rationing was imposed. Alcohol supply was strictly controlled, pubs closed for a period during the day, to stop essential workers neglecting their duties. This change illustrates how life in Britain changed; it was the 1980s before this restriction on pub opening hours was finally lifted.

By 1917 the war became a marathon, with no end in sight. The Government sought innovative means to raise money and the Black Country played its part in supporting those initiatives. Local charities raised funds through events including football matches, fêtes, collections and more to provide money for good causes. Parcels to prisoners of war, troops serving at the front and the wounded were all catered for. Christmas traditions were preserved, mainly for the children, with parties for those whose father was away at war.

Pearson takes a year by year approach to the combat, and concentrates most of his fire on the Home Front, and there are lots of intriguing details on the impact of the war locally.

As seen in the Black Country Bugle.

As seen in Halesowen News.

As seen in the Stourbridge News.