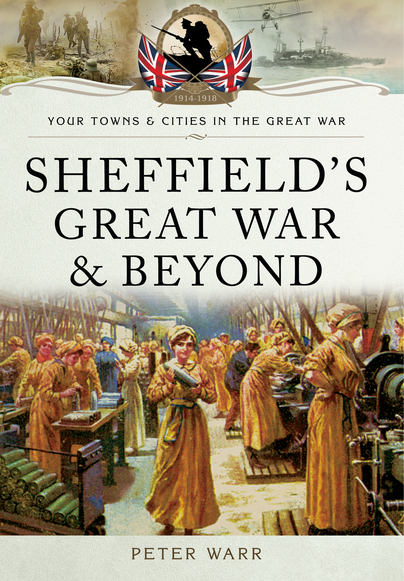 Sheffield's Great War and Beyond (ePub)

Click here for help on how to download our eBooks
Add to Basket
Add to Wishlist
You'll be £4.99 closer to your next £10.00 credit when you purchase Sheffield's Great War and Beyond. What's this?
Need a currency converter? Check XE.com for live rates

This book is out of the ordinary. As well as describing the many changes in Sheffield between 1914 and 1918, it tells about the troubling events in following years as poverty and riots took hold.

It is also special in identifying hundreds of small as well as large Sheffield companies that worked to provide the necessities of war. With many previously-hidden facts, the book describes the city's 'national factories', the new Ministry of Munitions, the government's control of companies, arguments about the employment of women, an increased emphasis on workers' welfare, the impact of the Sheffield Committee on Munitions of War, and the special contributions of the Cutlers' Company.

Compulsory call-up, conscientious objectors and the work of the Sheffield Military Tribunal are also brought to life, as are problems caused by a shortage of food and the eventual imposition of rationing. The city's German prisoners of war are introduced, as are the ravages of influenza and the terrible poverty and conflict that soon afflicted the city. These local changes are presented against a background of important national events and with more than 100 original photographs.

'An ideal read for anyone interested in Sheffield's history or the First World War.'