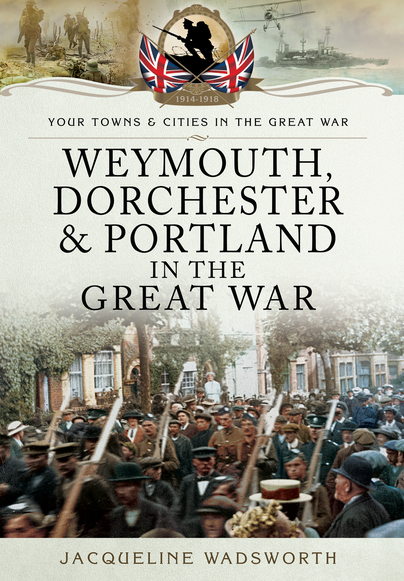 Click here for help on how to download our eBooks
Add to Basket
Add to Wishlist
You'll be £4.99 closer to your next £10.00 credit when you purchase Weymouth, Dorchester & Portland in the Great War. What's this?
Need a currency converter? Check XE.com for live rates

When war was declared in 1914, the people of South Dorset were taken by surprise. Initially, there was excitement as the garrison town of Dorchester sprang to life and Britain's Grand Fleet steamed from Portland Harbour to its war stations in the North Sea. But when the fervour subsided, what was it like for ordinary people? This book describes how they settled down with purpose to a life at war...

Women volunteered for Red Cross work, traders made the most of new markets, and mothers learned to cope not only with food shortages and blackouts, but the constant fear that their loved ones wouldn't return. Children saved their pennies to send 'comforts' to the troops, and everyone did their best to keep the home fires burning.

Read about the extensive prisoner of war camp established on the edge of Dorchester to house German captives; the wounded Australian soldiers who were sent to recover in Weymouth, where they became firm favourites with the ladies; and the soldiers billeted in Portland homes who didn't always treat their hosts with the respect they deserved.  Also included in the book are the stories of:

* A German spy who slipped through the net at Wyke

* Scandal at a local military hospital

Using contemporary letters, diaries and newspaper stories, and illustrated by almost 100 photos, this book gives warm account of life in Dorchester, Weymouth and Portland during the Great War, ensuring the people at home who lived through those dreadful years of conflict are remembered too.


This book was full of detail and I loved the use of photos, postcards, personal stories and newspaper excerpts and it is packed with social history as well too. It is a great introduction to what was going on in Weymouth, Dorchester and Portland and the surrounding area in the build-up too, during and immediate aftermath of the Great War. Portland was one of the main naval bases at the time so the impact on them is really shown and it was great to see how the Prisoners of War were treated in Dorchester and the set up of their camp.

It is 5 stars from me for this one, I really enjoyed the layout and the way that the author used the social history from the period, with the diary entries of those who lived in the area though the period, to show what it was really like. I will be checking out a few areas when we go back again to the area in July this year to do my own then and now comparisons photos too – very highly recommended!!

After months of research, Jacqueline Wadsworth uses stories she discovered in local archives, newspapers and old family letters and diaries, to give a colourful account of what life was like on the island for ordinary people... Portland's war story is told alongside that of Weymouth and Dorchester and the book is well illustrated with more than 100 photographs and pictures.

'Jacqueline Wadsworth's new book Weymouth, Dorchester and Portland in the Great War tells some fascinating stories of the human spirit during the Great War...'

'Wadsworth has a gift for picking out tales of the enduring nature of the human spirit.'

'this insightful book centres the reader in this part of Dorset for the outbreak, conflict and after-effects of the Great War. It cleverly uses diaries, letters and newspaper reports to depict how residents felt as their way of life was drastically changed.'

'Jacqueline Wadsworth uses stories she discovered in local archives, newspapers, and old family letters and diaries, to give a colourful account of what life was like.. for ordinary people.'

'There have been so many books about the Great War that any new one has to throw up significant new information or have a special angle. This on, in a quiet way, does both.'

A fantastic book exploring the experiences of ordinary people in the south Dorset area during the Great War as they adapted to the outbreak of conflict, from exploits of the German spy at Wyke, to the popularity of Australian troops with local ladies.
This account has a poignant and human feeling, and is a strong reminder of the sacrifices made at home during that time.

Exploring the experiences of ordinary people in south Dorset, as they adapted to the outbreak of war in 1914, this book ranges from the exploits of a German spy at Wyke, to the popularity of Australian troops with local ladies. The account has a very human feel and is a poignant reminder of the sacrifices made at home during the Great War.

Written in a pacy and engaging style, this book brings together a number of characters, incidents and anecdotes which not only reflect on the multi-layered story of South Dorset’s military involvement in the war, but capture the flavour of life on the home front. Jacqueline shows how the war was no respecter of social class, recounting the stories of families left grieving both in working class slums and the impressive country house of the Pope family, owners of the large Eldridge Pope brewery in Dorchester.

It is richly illustrated, containing over a hundred images, and makes a fascinating read for all those who have connections with the area, readers interested in military history, and people who feel a connection with the lives of people in a past which has now passed from living memory.

After reading this book, I shall visit a familiar area with a fresh perspective, peeling back the decades to connect with the people who walked the streets of South Dorset a hundred years ago.

As featured in the Dorset Echo this fascinating and powerful retold account of individual stories and the humorous recollections of the young men and women who's lives were changed forever is a must read.