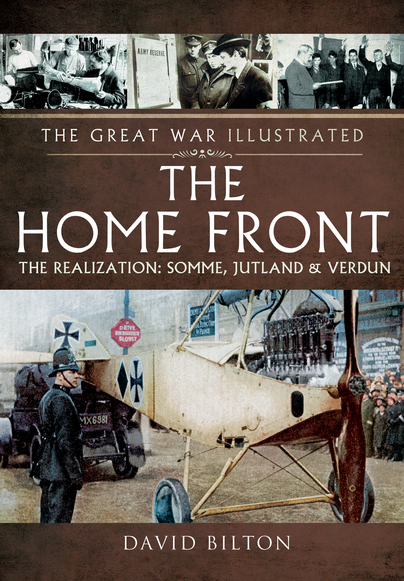 The Realization - Somme, Jutland and Verdun

Many books have looked at the effect of the war on the Home Front, but this is the first book to take a glimpse at the Home Front photographically from an international point of view, covering both Allied and enemy countries, juxtaposing the same situations in different countries to show a similar response.
This volume chronicles the changes brought on by just a few months of war: spies, increased casualties, food shortages, changes in work patterns, the shortage of men in the work force, women at work and at the end of the year the slow rush in Britain to volunteer for the army, hoping to not be called for service. It also looks at the Home Front for those caught behind enemy lines where life was both spartan, potentially dangerous and subject to the whim of the victor. The photographs, many of which have not been seen before and some which have never been published, clearly show that each year of war had a further profound effect on each nation. This unique series of international photographic books fits in with the author's more textual books on the Home Front: Hull in the Great War and Reading in the Great War, both of which explore the complex life of a city at war.

A graphic record which will appeal to all historians who will be left with a lasting visual impression of this conflict.

There are now a few books that cover the home front during the first world war, but not that many based mostly on photographs, and certainly not that many covering not only Britain but also the allied and enemy countries. David Bilton has compiled a brilliant collection of photographs that illustrate not only the effect the war had on the folks left behind, but also on the desperation, the futility of the war. Amazing.

... There are 105 pages of photographs many published for the first time. It is an admirable collection of interesting and illuminating pictures covering a range of themes from recruiting to Christmas, raids to casualties. The quality of production and printing is very high ensuring clear definition of the photographs combining to make an excellent volume.