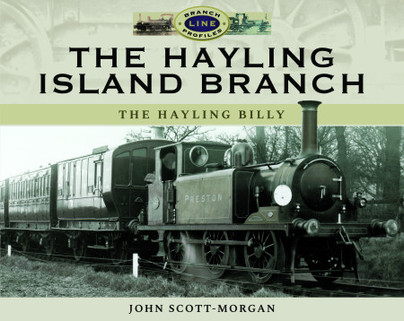 Click here for help on how to download our eBooks
Add to Basket
Add to Wishlist
You'll be £8.99 closer to your next £10.00 credit when you purchase The Hayling Island Branch. What's this?
Need a currency converter? Check XE.com for live rates

The Hayling Island Branch was one of Britain's most iconic sea side lines, connecting Havant with Hayling Island via Langston Harbour. Opening in 1865 for freight and 1867 to passenger traffic, it was after a few years of local control, managed and operated as part of the London Brighton & South Coast Railway, who were responsible for its upkeep until the railway grouping in 1923, when it became a part of the Southern Railway. The railway had a colourful and bucolic existence, with trains headed by the attractive Stroudley Terrier class tank locomotives and a collection of vintage carriage stock. In 1948 the branch became part of the Southern Region of British Railways, carrying on as a local and at times heavily used branch line, until its closure in November 1963. Today the lines track bed is a walking path from end to end, with only the former goods shed at Hayling Island to show the visitor any tangible evidence of the railways existence.

A well-illustrated work concentrating mainly on the BR period (including much in colour), but with a nice selection of period views from the LBSC and Southern Railway eras.

Another book of great interest for those lovers of the railway in times past and who like stories based on real facts.

An interesting and nostalgia-inducing book. Recommended.

This is an excellent title and well researched by its author.

Push this book in your rucksack as a guide when you head south to pay homage to the old 'Hayling Billy', which is now a popular footpath and cycle way.

An impressive compendium of informatively captioned black & white photos, as well as a concluding and major section of full color photos, "The Hayling Island Branch: The Hayling Billy" is the latest addition to the outstanding Pen & Sword Books series 'Branch Line Profiles' and is unreservedly recommended for personal, professional, community, college, and university library collections on the history of British railroads.

New historical information on the Hayling Island branch, one of Britain's most iconic seaside lines.