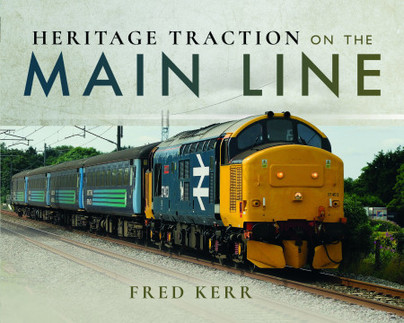 Click here for help on how to download our eBooks
Add to Basket
Add to Wishlist
You'll be £10.00 closer to your next £10.00 credit when you purchase Heritage Traction on the Main Line. What's this?
Need a currency converter? Check XE.com for live rates

In an earlier album titled BR Diesel Locomotives in Preservation Fred Kerr detailed the many classes of BR diesel locomotives that had been preserved and noted that some purchases had been made with the hope of operating them on the national network.

The Railways Bill 1993 provided an opportunity for this to happen and this album shows such locomotives at work during the early part of the 21st century upto December 2016. During this period many new train operators entered the market and their early operations used elderly locomotives withdrawn from service by their original operators until their business(es) were established and new locomotives could be bought. On occasion these new companies were prepared to hire preserved locomotives with main line access to service short-term contracts and these, mainly freight, services provided much of the variety of locomotive operations that offset the increasing sight of multiple unit train services that epitomise the modern railway.

The author has chosen to consider “heritage” traction as any locomotive older than twenty years, which therefore includes electric locomotives but excludes those of that age which are still operated by their owners as at April 1 1994 when British Railways (BR) was privatised. This results in the Class 59 fleet being excluded because its ownership has been constant but the Class 60 fleet being included because of purchases by Colas Railfreight after that date.

In this volume the term 'heritage train' has been used to identify locomotives by age, more than twenty years, rather than by ownership or usage.
The photographs are of excellent standard with accurate captions.

Fred is to be congratulated on this album which is highly recommended.

The perfect complement to his previous work with which to close a topic in a big way.