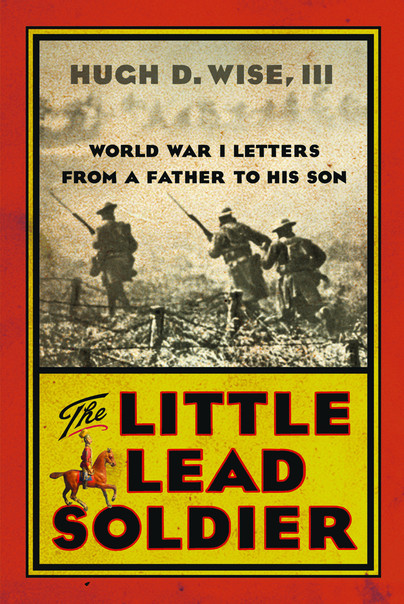 World War I Letters from a Father to His Son

Add to Basket
Add to Wishlist
You'll be £19.99 closer to your next £10.00 credit when you purchase The Little Lead Soldier. What's this?
+£4.50 UK Delivery or free UK delivery if order is over £35
(click here for international delivery rates)

Arriving in France in April 1918, Col. Hugh D. Wise, commander of the U.S. 61st Infantry Division, held a precious object. It was a toy soldier given to him by his six-year-old son, Hugh, Jr. The boy had asked the little lead soldier to write him with news of his father. The colonel saw action in two of the most important campaigns the Americans fought, St. Mihiel and Meuse-Argonne, and the little lead soldier dutifully assured a boy thousands of miles away that his father was safe: “The men had been shelled, gassed, and raked by machine guns constantly: and undergone several intense bombardments; and made a difficult though successful attack; and had resisted a fierce counter-attack. They had dug trenches, moved, and dug again. All this time they had been without shelter, exposed to a cold driving rain and without warm food—They were wet, chilled, and tired when called upon for even greater efforts but they respond- ed with the energy and spirit of fresh troops.” A treasured family heirloom, these wartime letters are presented for the first time along with letters from Colonel Wise to his wife, and engrossing historical context provided by his grandson, Hugh D. Wise, III. The Little Lead Soldier: World War I Letters from a Father to His Son is a remarkable story of how a father performed his dangerous duty while keeping a promise to his boy.

“After the Civil War, Walt Whitman observed that ‘the real war will never get in the books.’ This collection of letters provides keen insight into ‘the real’ First World War. Col. Hugh D. Wise, who commanded a U.S. regiment that fought in the epic battles of St. Mihiel and Meuse-Argonne, penned not only vivid accounts of the carnage, blunders, and confusion of combat but also lyrical description of peaceful scenes he observed. Anyone interested in under- standing the real ‘War to End All Wars’ will read this ably edited compendium with pleasure and profit.”—Michael Burlingame, author of Abraham Lincoln: A Life

HUGH D. WISE, III graduated from Princeton University with honors in history and received a law degree from the University of Pennsylvania. He also served in the Peace Corps in Brazil, where he was guest lecturer in American history at Universidade do Brasil and Universidade Catolica do Rio de Janeiro. He is a trial attorney, residing in Aspen, Colorado.