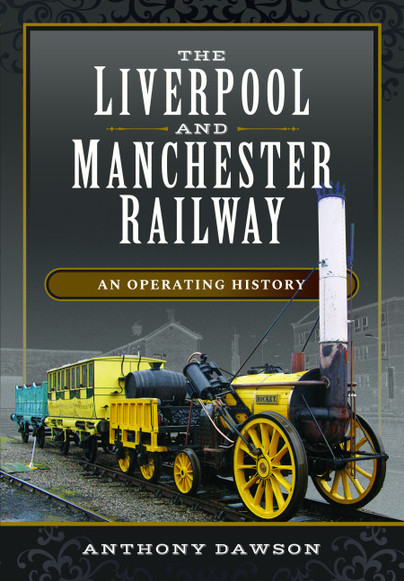 The Liverpool and Manchester Railway (Hardback)

Add to Basket
Add to Wishlist
You'll be £22.50 closer to your next £10.00 credit when you purchase The Liverpool and Manchester Railway. What's this?
+£4.50 UK Delivery or free UK delivery if order is over £40
(click here for international delivery rates)

Much has been written about the Liverpool & Manchester Railway, especially how it came into being and the Rainhill Trials, but very little has been said about what happened after the grand opening on 15 September 1830.

Drawing on years of research, and practical experience of working with the replica of Stephenson’s Planet, this book shows how the Liverpool & Manchester Railway worked in its day-to-day operations, including passenger and goods working, timetabling, signalling and when things went wrong.

Chapters will describe what it was like to work and travel on the railway, and will study the evolution of passenger accommodation, working and safety practices. Finally the book looks at how the Liverpool & Manchester fits into the wider picture, how its operational practices, rules and regulations, became the basis of national practices in 1841.

While the Stockton & Darlington Railway is renowned as the first public railway to use steam traction, arguably the Liverpool & Manchester Railway is equally if not more important for its pioneering role. The story of the railway’s construction is relatively well known and documented, as are its famous Rainhill locomotive trials, and the drama of the opening day when the MP William Huskisson was run down and killed. However, following the opening, much less is known about the L & M’s organisation and how the railway operated. Drawing extensively on records in the National Archive, this exceptionally well-researched and fascinating book explores just why the railway is so significant.
The L & M was the first ‘inter-city’ railway offering a timetabled public service of trains for both passengers and freight. There was very little in the way of a blueprint for such an operation, and as the book graphically shows, most aspects of how to organise and manage such an operation had to be developed from scratch. To start with the directors looked to other forms of transport such as the turnpikes, open to all comers on payment of a toll. The Stockton & Darlington had started this way but it had not worked well, and by the time the L & M was ready to open the principle had been determined of running the railway themselves as an entity. Following its opening in 1830, the L & M would function as a separate undertaking for fifteen years until merging in 1845 with the Grand Junction Railway. Throughout this time, and earlier, the name of Henry Booth dominates, officially Secretary and Treasury but effectively General Manager – one of railway history’s unsung heroes.
Looking at the structures, systems and practices developed by the L & M, what is remarkable is how so much of what the company established became, not just the ground rules that other early railways would follow, but ones that can still be seen to the present day. The book highlights many examples. Thus it was the L & M that established the concept of the double line railway with trains running in opposite directions on separate tracks labelled ‘Down’ and ‘Up’. Separation of goods from passengers and Mail, with dedicated trains for each – something that had not at first been intended – was also established by the L & M, as was the idea of ‘first’ and ‘second’ class. Interestingly, initially there were separate ‘first’ class trains, the world’s first ‘expresses’, and stopping ‘second’ class ones with ‘third’ class only coming later. An 1826 Act of Parliament had established the Railway Police primarily for law and order and security purposes, but it was the L & M that first appointed ‘policemen’ to also give directions to drivers and operate points, leading of course to the colloquial term ‘bobby’ for the signalman.
By today’s standards, the way the railway operated looks precarious, especially the ‘time interval’ principle for train running. Inevitably there were accidents although it is perhaps surprising that there were not more as traffic increased – including the trains of other railways such as the Grand Junction. From 1830 to 1838 there were three passengers killed in train accidents (as distinct from falling out or stepping onto the line) – a remarkably low figure in the circumstances.
The book has four key sections looking in turn at the passenger business, freight & mineral business, timetabling, train operations & train working, and signalling & safety. The L & M’s Rules & Regulations for March 1839 are also included as an appendix, where, again, it is interesting to see key principles and rules that in a modernised form still apply today, such as displaying a red light (or bull’s eye) to the rear and a white light to the front of a train, and for protection of failed trains.
Author Anthony Dawson is to be congratulated on producing a valuable insight into how the operation of railways developed from first principles. Anyone interested in the history of early railways will find this well worth adding to their bookshelves.

This is a welcome addition to the bibliography and is to be commended.

This is an excellent high quality book with lots detail, well researched and referenced.

For those of you interested in railway history this description of pioneering railway operations almost two centuries ago provides a valuable insight into where we started from. The book is written in a style that makes it readable whilst still containing a plethora of facts and figures. Not all reference books achieve such a happy medium. Recommended if you are interested in early railway history.

... well researched and a most welcome addition to the literature of railways.

The author has clearly undertaken extensive research to present what is both an interesting and informative portrait of what life was actually like on the L&M, and certainly this reviewer learnt much that he was unaware of.

For me the book is quite heavy going but must say it is researched thoroughly in much detail. One for the ‘specialist’ enthusiast methinks!