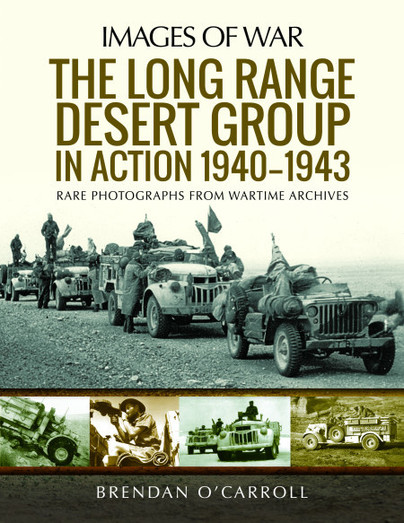 As featured in the Daily Mail: 'Unseen photos show elite Allied soldiers storming Italian airbase in Libya during 1942 Operation Caravan that destroyed 23 warplanes... and caused a total headache for Hitler.'

The Long Range Desert Group has a strong claim to the first Special Forces unit in the British Army. This superb illustrated history follows the LRDG from its July 1940 formation as the Long Range Patrol in North Africa, tasked with intelligence gathering, mapping and reconnaissance deep behind enemy lines. Manned initially by New Zealanders, in 1940 the unit became the LRDG with members drawn from British Guards and Yeomanry regiments and Rhodesians.

So successful were the LRDG patrols, that when the Special Air Service were formed, they often relied on their navigational and tactical skills to achieve their missions.

After victory in North Africa the LRDG re-located to Lebanon before being sent on the ill-fated mission to the Dodecanese Islands in the Aegean.

Serving independently, when the Germans overwhelmed and captured the British garrisons, many LRDG personnel escaped using their well-honed skills.

Many images in this, the first pictorial history of the LRDG, were taken unofficially by serving members. The result is a superb record of the LRDG’s achievements, the personalities, their weapons and vehicles which will delight laymen and specialists alike.


A very useful and interesting book for modelers of vehicles and figures and documentarists in general.

The Long Range Desert Group were pioneers of Britain's special forces, using their superb field craft and knowledge of the desert to penetrate deep behind the lines, sometimes raiding, but primarily focusing on reconnaissance to gather intelligence on enemy strength and movements, and in so doing they created a blueprint which the later SAS raids used to great effect. This rather large entry in the Images of War series follows the Group from their formation in July 1940 through to the conclusion of the North African campaign, with an epilogue in the Aegean in late 1943, shortly before their disbandment. Its considerable number of photographs were all taken by LRDG members, and the lack of formality in these gives a great sense of how they dressed, equipped, and conducted themselves, how they lived deep in the desert, the problems they encountered, and the aftermath of some of their rading expeditions.

Despite the text being of secondary importance in this book, there is enough action in O’Carroll’s narrative to excite the imagination and admiration for these soldiers. But it is the photographs that the Images of War series is known for and this edition does not disappoint. O’Carroll’s selection covers all aspects of the LRDG’s work and the vehicles and weapons they used in their devastating raids. The final section on their efforts in the Mediterranean illuminates a less familiar area of their deployment. Modellers will find everything they need in this book for their art, and wargamers will find much to chew on to recreate LRDG scenarios. General readers of the Desert War will also find the book informative and entertaining.

The latest Images of War book from Pen and Sword takes us to North Africa. Many of the photos I have of my uncles show them in North Africa, although this book is mainly about the New Zealanders. Fascinating.

Once again a book in the "Images of War" series stands out for the quality and quantity of photos. The LRDG is a subject that O'Carroll is well acquainted with and that will thrill the reader and historian.

This offering from Pen and Sword is part of the Images of War series is the most appealing I have obtained so far due to the presentation and subject matter. The text is well written and I enjoyed reading it and in doing so learned bits I didn’t know previously. The photographs brought together here are a stunning selection despite the various quality as it shows the men and machines living the war they fought in, it also puts the reader in touch with these men none of whom I could find alive today. Lastly the captions are well written and provide that extra touch that photographs benefit from.

As for the photos, just marvellous.

The narrative was informative and full of exciting detailed accounts of operations that occurred throughout the LRDG's reign of terror on the Axis forces during the war.

Brendon O'Carroll's 'Images of War, The Long-Range Desert Group in Action' is a collection of rare photographs from wartime archives. Old soldier's photographs and others contributed by collectors and historians to illustrate the wartime exploits of a small military unit causing death and destruction behind German and Italian lines in North Africa in WW ll.

These raids were an exception to its main role, intelligence gathering. In 1942, when Middle East HQ was planning an offence, LRDG Road Watchers hidden in well concealed hideouts alongside the Tripoli- Benghazi and recorded enemy movements to and from the front-line.

Brendon O'Carroll explains that when the Eighth Army successfully drove Axis units from North Africa, GHQ Middle East saw no future for the LRDG. However, when Italy surrendered the unit was retrained, equipped with jeeps and transferred to the Dodecanese Islands in the Aegean in 1943 where it was overwhelmed by German forces. The book is a must-read page turner.

All in all another worthwhile publication well worth its money.

...will be of interest to modelers and military historians alike.

This book is different from most books about the Long Range Desert Group (LRDG) as it contains a great deal of rare or never before published photographs. It includes a lot of details of special interest to military vehicle buffs, special forces insignia collectors and scale modelers.

A fine collection of archive images, the large majority of which I had mot seen before, as they were taken by the patrol members themselves, images collected from private collections. A 215-page soft-cover book packed with archive images.

All in all a great resource for who wants to model dioramas from this period and area or those who just want to learn more about those very special actions in the desert during those years, and about the very brave men driving those trucks for thousands of miles through uncharted and hostile territory.

This is a good, interesting book about a famous, but relatively small, group of men who, through their early work, facilitated the start and future success of their somewhat more famous and flamboyant group, the SAS. Indeed, without the skills, knowledge of the desert and equipment of the LRDG the SAS probably would not have gone further than a couple of raids.

An excellent addition to the Images of War series from Pen & Sword.

This was an excellent book indeed, the rogue LRDG and I feel I can call them that as some of the characters involved in the group did seem to be a bit roguish or seen as the less desirables. But this shouldn’t take away from the men indeed because as your reading the book, what comes through is the fact that these were men that were willing to do what it took and they often succeeded. I should say that whilst reading this book I discovered a programme on the BBC about the LRDG too, which I watched too which was fine but I can honestly say I got more from the book. If anything the programme was able to give more layers to the characters in the book. If you want bravery and conviction these were certainly the guys you wanted on your side, and you can certainly see why they were seen as the beginning of the SAS. A thoroughly good book packed with great pictures, the pictures are most of ‘time off’ but it’s a great collection. The written information is also really good and very informative, I’ve learnt a lot from this book. Highly recommended.

Here is another of the Images of War series from Pen & Sword. All of the others of the series have had good reviews on this site but, for me, this book stands out. The author, Brendan O’Carroll, admits that over twenty years of research went into this book. Dozens of people gave permissions, support and their stories. All of this was not in vain for here we have a superb, unique visual record of the men and their exploits. Every photograph contains more than at first meets the eye.
The Long Range Desert Group punched far above its weight and as the first of Britain’s Special Forces was a large influence on the present S.A.S. As with other books of this series there is very little text other than annotations. What text there is makes one want to read the other books on this subject by this author.
We highly recommend this book to both the browser and the ‘studier’.

Brendan O'Carroll's latest book, is a triumph.
Three hundred photographs, many of which will be new to even ardent LRDG enthusiasts. Most of the images were taken by the troopers on privately owned cameras and provide a unique insight into life whilst out on patrol.
Fantastic as a stand alone book or to accompany Brendan's other books, the photographs are amazingly detailed and broken down into eight chapters detailing the early days of the LRDG, operations in the Fezzan, the types of vehicles, equipment and weapons used, the LRDG air section, Barce raid, the units final days in the desert and the Aegean campaign.
An outstanding resource for the amateur historian, researcher, militaria collectors, re-enactors, military modelers' and vehicle restorers
If a picture paints a thousand words here are more than three hundred thousand for you to savour and enjoy.

Brendan O’Carroll lives in Auckland, New Zealand and recently retired from the New Zealand Customs Service. With a long time interest in military history, the Long Range Desert Group has become his speciality. He has interviewed over 30 veterans while writing The Kiwi Scorpions: The Story of the New Zealanders in the LRDG (2000), Bearded Brigands (2002) and Barce Raid: The LRDG’s Most Daring Exploit in World War Two (2005). This book follows The LRDG in the Aegean (2020) and The Long Range Desert Group in Action 1940 -1943 (2020) under the Pen and Sword Military imprint. He has numerous other published works and articles to his credit. In 2006 his work was recognised by awards from the New Zealand Military Historical Society. 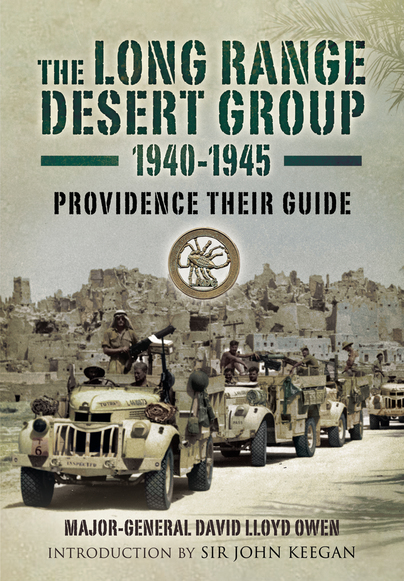 Click here to buy both titles for £30.98
More titles by Brendan O'Carroll