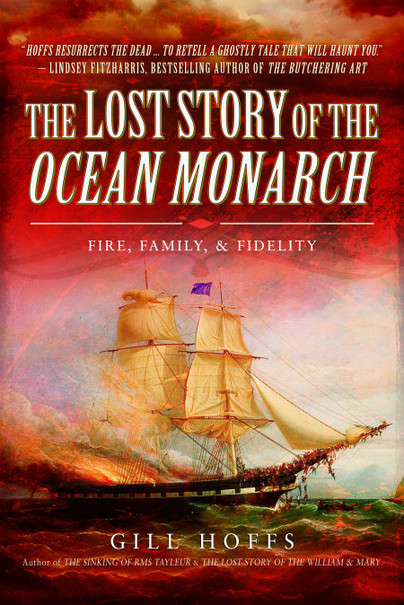 The Lost Story of the Ocean Monarch (ePub)

Click here for help on how to download our eBooks
Add to Basket
Add to Wishlist
You'll be £4.99 closer to your next £10.00 credit when you purchase The Lost Story of the Ocean Monarch. What's this?
Need a currency converter? Check XE.com for live rates

“The ship was almost instantly in flames … Some jumped overboard immediately, and all was in indescribable confusion. The masts began to fall one after another, and it is supposed killed great numbers by their descent. Others, it is feared, were roasted alive, but the majority were drowned.” (Hull Advertiser and Exchange Gazette, 25 August 1848)

The Ocean Monarch was only a few hours out of Liverpool on 24 August 1848 when a cabin passenger shouted “Fire!” and all hell broke loose. Bound for Boston with almost 400 people on board, the emigrant ship was soon ablaze with little chance of putting the flames out. People watched helplessly from their cottages along the Welsh coast as some ships ignored the travellers’ plight while others raced to their aid. On the 170th anniversary of the disaster Gill Hoffs reveals the full story of this forgotten wreck, including tales of French royalty, an American artist, and a courageous stewardess who gave her life to save her fellow travellers. Discover what happened to the passengers and crew, including:

James K. Fellows, a kindly American jeweller trying to get home to his family

Jotham Bragdon, the first mate who fled the wreck then returned to shore a hero

Mary Walter and her mysterious ‘family’, escaping danger in London only to find greater peril lay at sea

Follow the murder trial of a crew of rescuers and find out the real fate of their ‘victim’ – and whether the mysterious Irish toddler ‘Kate’ found her family again.


In twelve chapters, Hoffs explores events and people before, during, and after the fire. She includes some black-and-white photographs, an epilogue, and personal note, as well as appendices that provide a chronology of the corpses and details about them, locations of grave sites and inquests, and a list of medals. In addition, there is a list of names of passengers, stewards, stewardesses, the captain and crew, and some who were aboard other vessels and came to the doomed ship’s aid. A select bibliography and index complete the text. Interspersed throughout the narrative are firsthand accounts and newspaper reports of what happened that day and in the days that followed... an important contribution to collections focusing on shipwrecks and emigrant stories.

Shipwrecks were common in the 19th century, so Gill Hoffs' thoroughly researched and engrossing account is a valuable opportunity to understand some of our ancestors' experiences.

Article: 'Author to hold signing to mark release of third book' as featured online by

Article: 'Third release by history author is ready to set sail' as featured by

Very many congratulations!
To handle a dramatic event of such short duration, plus such a large cast, and expand to book length require skill. You have done a lot of research and you pull it off by liberal use of verbatim or journalists' reports. Layout of the book is first class. Significant detail is what makes a scene live - and your use and choice of this is exemplary. I don't know another contemporary writer who does it better. Very many congratulations.

YOU’VE DONE IT AGAIN : produced another great book! In your own inimitable style: lots of meticulous research, which you then weave into a story about the real people of the time. You manage to convey the impression that you were actually there. I started the book at the weekend and literally couldn’t put it down... I finished it in 3 days, including one very late night! You must feel (justifiably) very proud. Rest on your laurels for a little while now but don’t leave it too long: I don’t want to wait another 2 years for a good read!

Gill Hoffs grew up on the Scottish coast before gaining a BSc in Psychology from the University of Glasgow. She worked with children with a variety of needs before she had her son in 2007. Gill’s short nonfiction, Black Fish won the 2011 Spilling Ink Nonfiction Prize, and her work is available widely online and in print, see her website: gillhoffs.wordpress.com for details