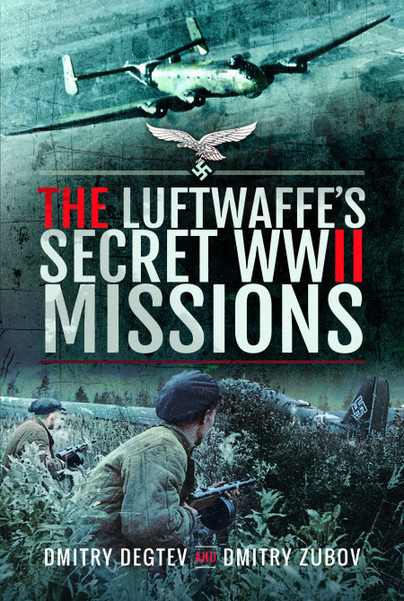 Add to Basket
Add to Wishlist
You'll be £17.50 closer to your next £10.00 credit when you purchase The Luftwaffe's Secret WWII Missions. What's this?
+£4.50 UK Delivery or free UK delivery if order is over £35
(click here for international delivery rates)


The diligent research of German and Russian archives by Dmitry Degtev and Dmitry Zubov has revealed valuable information about multi-faceted secret operations, locked away for many years from public scrutiny. The biographic details of Luftwaffe air crews, agents and their subversive activities, German and Russian personalities enhance the narrative of this eminently readable book. The Luftwaffe’s Secret WWII Missions is a valuable contribution to the historiography of the Second World War.

"It is interesting to read a book written from a Russian perspective."

Using recently declassified documents, the authors provide a well-illustrated account of Luftwaffe secret missions. This is a most interesting account of the special Luftwaffe units that flew agents into enemy territory during WWII. – Most Highly Recommended

"A nice compilation of missions. Enjoyed it".

It’s an easy read, and I found the fact that this book was focused on espionage carried by the German military refreshing read.
Normally when I’ve read around this topic within World War 2, it has been about the Allied missions and spies. So, it made a change to read about the types of missions being carried out by the Germans.

This book will appeal to several folk, it’s worth a read by aircraft enthusiasts, as they talk about some of the rare airplanes used such as the Ar-232A/Tatzelwurm. This will be a useful read for wargamers who play WW2 games, as it could provide some interesting ideas for scenarios. Finally, I say that those interested in spies and espionage should also pick this book up, as they won’t be disappointed.

"Offering an impressive wealth of documented detail, "The Luftwaffe's Secret WWII Missions" is a truly extraordinary and unique contribution to the growing library of World War II histories and is certain to be an enduringly welcome and appreciated addition to personal, professional, community, college, and university library collections."

Offering an impressive wealth of documented detail, "The Luftwaffe's Secret WWII Missions" is a truly extraordinary and unique contribution to the growing library of World War II histories and is certain to be an enduringly welcome and appreciated addition to personal, professional, community, college, and university library collections.

The Luftwaffe's Secret WW ll Missions is thought provoking book and one cannot help but compare it Special Operation Executive's (SOE) missions during the same period. Luftwaffe's special units flew thousands of miles to place teams of agents and saboteurs into far flung outpost in Eastern Europe, behind Russian lines on the Eastern Front and Asia. The SOE and SIS carried out similar missions in the Far East and Europe. The stark difference was SOE missions took place in pro-British areas while the Luftwaffe's missions, thousands of miles from friendly forces were often suicides missions or 'turned former captured P o W' used the missions for a quick return home.