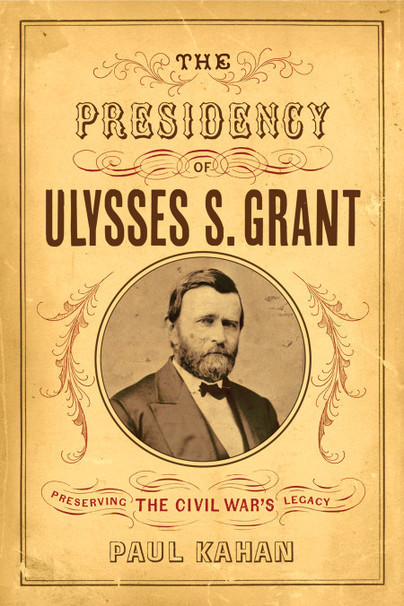 Add to Basket
Add to Wishlist
You'll be £22.95 closer to your next £10.00 credit when you purchase The Presidency of Ulysses S. Grant. What's this?
+£4.50 UK Delivery or free UK delivery if order is over £35
(click here for international delivery rates)

On December 5, 1876, President Ulysses S. Grant transmitted his eighth and final message to Congress. In reviewing his tenure as president, Grant proclaimed, “Mistakes have been made,” though he assured Congress, his administration’s “failures have been errors of judgment, not of intent.” Until recently, scholars have portrayed Grant as among the country’s worst chief executives. Though the scholarly consensus about Grant’s presidency is changing, the general public knows little, if anything, about his two terms, other than their outsized reputation for corruption. While scandals are undoubtedly part of the story, there is more to Grant’s presidency: Grant faced the Panic of 1873, the severest economic depression in U.S. history, defeated the powerful Senator Charles Sumner on the annexation of Cuba, and deftly avoided war with Spain while laying the groundwork for the “special relationship” between Great Britain and the United States. Grant’s efforts to ensure justice for African Americans and American Indians, however, were undercut by his own decisions and by the contradictory demands of the various constituencies that made up the Republican Party.

In The Presidency of Ulysses S. Grant: Preserving the Civil War’s Legacy, historian Paul Kahan focuses on the unique political, economic, and cultural forces unleashed by the Civil War and how Grant addressed these issues during his tumultuous two terms as chief executive. A timely reassessment, The Presidency of Ulysses S. Grant sheds new light on the business of politics in the decade after the Civil War and portrays an energetic and even progressive executive whose legacy has been overshadowed by both his wartime service and his administration’s many scandals.

PAUL KAHAN is a lecturer in history at Ohlone College in Fremont, California. He received his PhD in history from Temple University and is the author of Eastern State Penitentiary: A History,a national finalist for the American Association of State and Local History book award.