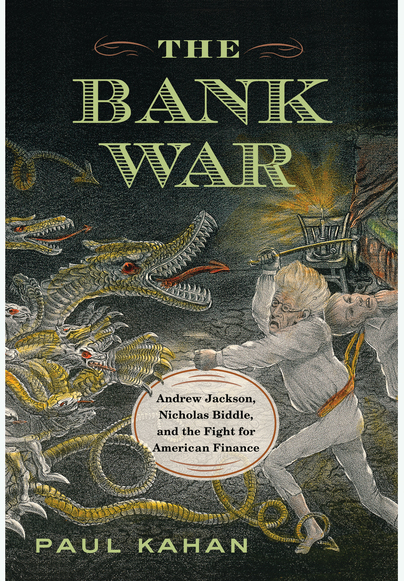 Andrew Jackson, Nicolas Biddle, and the Fight for American Finance

The Bank War: Interview with Paul Kahan on The History Buffs Podcast

It Started With A Meme: Q & A with Paul Kahan on Geekadelphia

Late one night in July 1832, Martin Van Buren rushed to the White House where he found an ailing President Andrew Jackson weakened but resolute. Thundering against his political antagonists, Jackson bellowed: “The Bank, Mr. Van Buren, is trying to kill me, but I shall kill it!” With those famous words, Jackson formally declared “war” against the Second Bank of the United States and its president Nicholas Biddle. The Bank of the United States which held the majority of Federal monies had been established as a means of centralizing and stabilizing American currency and the economy, particularly during the country’s vulnerable early years. Jackson and his allies viewed the bank as both elitist and a threat to states’ rights. Throughout his first term, Jackson had attacked the bank viciously but failed to take action against the institution. Congress’ decision to recharter the bank forced Jackson to either make good on his rhetoric and veto the recharter or sign the recharter bill and be condemned as a hypocrite.

In The Bank War: Andrew Jackson, Nicolas Biddle, and the Fight for American Finance, historian Paul Kahan explores one of the most important and dramatic events in American political and economic history, from the idea of centralized banking and the First Bank of the United States to Jackson’s triumph, the era of “free banking,” and the creation of the Federal Reserve System. Relying on a range of primary and secondary source material, the book also shows how the Bank War was a manifestation of the debates that were sparked at the Constitutional Convention—the role of the executive branch and the role of the federal government in American society—debates that endure to this day as philosophical differences that often divide the United States.

PAUL KAHAN is a lecturer in history at Ohlone College in Fremont, California. He received his PhD in history from Temple University and is the author of Eastern State Penitentiary: A History,a national finalist for the American Association of State and Local History book award.