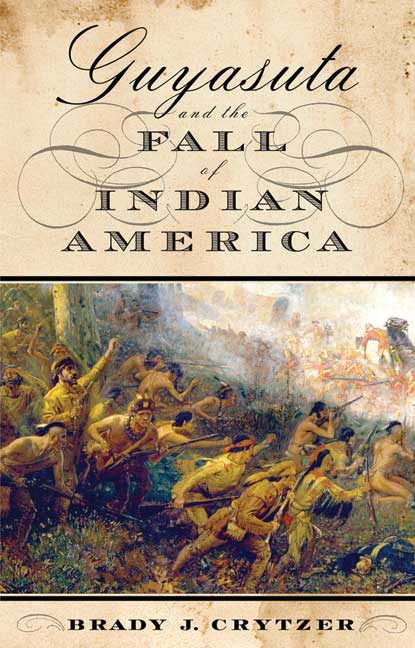 Guyasuta and the Fall of Indian America (Hardback)

Add to Basket
Add to Wishlist
You'll be £25.00 closer to your next £10.00 credit when you purchase Guyasuta and the Fall of Indian America. What's this?
+£4.50 UK Delivery or free UK delivery if order is over £40
(click here for international delivery rates)

Nearly a century before the United States declared the end of the Indian Wars, the fate of Native Americans was revealed in the battle of Fallen Timbers. In 1794, General Anthony Wayne led the first American army— the Legion of the United States—against a unified Indian force in the Ohio country. The Indians were routed and forced to vacate their lands. It was the last of a series of Indian attempts in the East to retain their sovereignty and foreshadowed what would occur across the rest of the continent. In Guyasuta and the Fall of Indian American, historian Brady J. Crytzer traces how American Indians were affected by the wars leading to American Independence through the life of one of the period’s most influential figures.

Born in 1724, Guyasuta is perfectly positioned to understand the emerging political landscape of America in the tumultuous eighteenth century. As a sachem of the vaunted Iroquois Confederacy, for nearly fifty years Guyasuta dedicated his life to the preservation and survival of Indian order in a rapidly changing world, whether it was on the battlefield in the face of powerful imperial armies or around a campfire negotiating with his French, British, and American counterparts. Guyasuta was present at many significant events in the century, including George Washington’s expedition to Fort LeBoeuf, the Braddock disaster of 1755, Pontiac’s Rebellion and the Battle of Bushy Run in 1763, and the Battle of Oriskany during the American Revolution. Guyasuta’s involvement in the French and British wars and the American War for Independence were all motivated by a desire to retain relevance for Indian society. It was only upon the birth of the United States of America that Guyasuta finally laid his rifle down and watched as his Indian world crumbled beneath his feet. A broken man, debilitated by alcoholism, he died near Pittsburgh in 1794.

Supported by extensive research and full of compelling drama Guyasuta and the Fall of Indian America unravels the tangled web of alliances, both white and native, that determined the course of Native and American history and explains how the world of the Indians could not survive alongside the emergent United States.