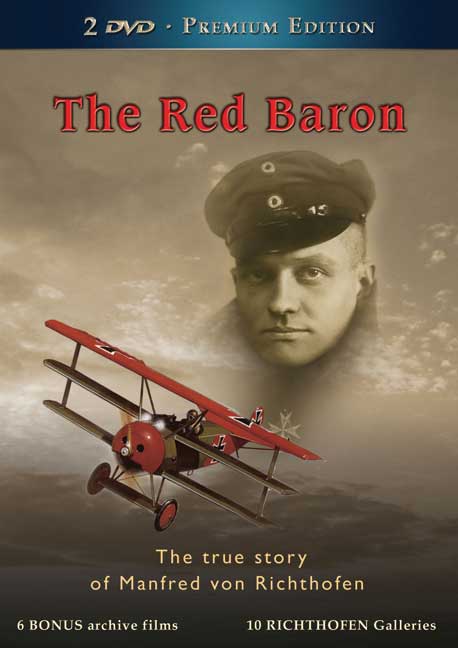 Add to Basket
Add to Wishlist
You'll be £15.99 closer to your next £10.00 credit when you purchase The Red Baron DVD. What's this?
+£4.50 UK Delivery or free UK delivery if order is over £40
(click here for international delivery rates)

Manfred von Richthofen, more famously known as the Red Baron, is arguably the most famous and widely recognised German fighter pilot to ever take to the skies in the history of warfare. During his flying career in the First World War, Richthofen was officially credited with 80 enemy kills, a number which dwarfs other famous pilots such as Douglas Bader who scored 22 enemy kills. Originally a cavalryman, Richthofen transferred to the Air Service in 1915 where his skills as a pilot were quickly recognised. By 1918, he was regarded as a national hero in Germany and his death in April rocked the nation.
This documentary tells the true story of Manfred von Richthofen, using sensational original footage shot during the First World War. It covers his life through its entirety, from his birth in Schlesien through to the flying exploits of this astonishing German hero, including the dog fights of June 1917 in Flandern. In the air at this time, the Allies securely maintained air superiority and all available German hunter squadrons were thrown into the battle in order to subdue their opponents.

Richthofen and his fellow pilots mastered the tasks given to them brilliantly and performed truly astounding feats in the air. The four hunter squadrons of the JG 1 took over the airspace within a time frame of just two weeks, achieving a staggering 40 aerial victories.
While the Germans were flying high with the recent turn of events, disaster struck when Richthofen failed to return after an enemy flight. What happened on this fateful flight and how did the Red Baron actually meet his end? The answer to that question, which has been asked for almost a century, is finally revealed in this stunning documentary about one of the greatest heroes of the German Luftwaffe. Complete with a selection of bonus footage and scores of original photographs, some of which have never been seen, this DVD will appeal greatly to military and aviation enthusiasts alike.

Pen & Sword Military have published a series of video documentaries produced by the German History Films production company. This produces a common format for these documentaries with a commentary choice of English or German. A major component is war film from German archives. The production quality is very good and the German commentary is the authentic voice. The English commentary is a straight forward translation of the German and in parts can seem ponderous. For non- Germans, the commentary may appear to be rewriting history but it is a German perspective that reflects the attitudes at the time when the original war film was shot. In this DVD the archive film has been well selected and is accompanied by bonus archive films and photo galleries. The subject of the documentary is a legend internationally known and one of the few individuals to have achieved this level of celebrity during a bloody war of attrition that saw millions of Europe's young men slaughtered in the mud and filth of the trench lines. It was also a war that saw volunteers from the British and French colonies joining in the battle against Germany. In little more than a decade, aircraft had developed from the frail machines that hesitantly took to the air for flights measured in yards rather than miles, to aircraft that could carry one or two men to altitudes of 20,000 feet and support machine guns and bombs. Combat could take place from almost ground level to 20,000 feet where the pilots had to fly and fight without oxygen and where guns could freeze. Much of the combat took place directly over the trench lines and much of the combat took place below 9,000 feet.
When Richthoven was killed, he was engaged in an aerial fight at less than 100 feet altitude and well within range of light machine guns on the ground. Of the thousands of young men who took part in the air battles, only a handful are remembered as individuals and they are the aces who shot down numbers of enemy aircraft and were treated as the stars of their time by the news media. The larger the number of kills, the greater the fame, the more likely that an individual would be remembered in history. Richthoven was typical of his generation of pilots on both sides of the lines, beginning as a cavalry officer and then becoming a pilot. Initially, both Germany and Britain took the view that an officer should have a driver in the air and early two seat machines frequently saw the aircraft flown by NCOs. As single seat machine gun armed aircraft became the primary fighter aircraft, the pilot was most likely to be an officer and most likely to have previously served with the cavalry.

There is debate about the reasons, but one logical view is that the stalemate of trench warfare required infantry and artillery, making the cavalryman largely redundant. There is also the view that most aircraft were army air force machines and employed in the scouting role that has traditionally been the role of cavalry. Ex-cavalry officers who became pilots preferred to believe that they were the natural hunters of the air and had the sensitivity and honour required rather than the brutish qualities of the muddy bloody infantry. Whatever the reason, the fighter pilots from both sides were very similar people and chose to see their work as chivalrous knightly combat. They were often below average height, as were the US astronauts decades later and one reason for that was the limited capacity of aircraft in the same way that early spacecraft put space and weight at a premium. The handful of pilots from both sides who achieved more than twenty kills often went on to notch up more than
seventy kills until they were themselves wounded seriously, or killed in combat, or killed in flying accidents. By modern military medical assessment, many of them should have been retired from front line flying half way through what became their combat career. Richthoven received a head wound and some believe that he developed combat stress and was unfit to fly again. As a notable German air hero, he was too valuable for propaganda and allowed to return to combat. He may have developed a death wish and he was certainly flying in a manner than made him vulnerable and which he would not have permitted in any of his squadron pilots.

When he was fatally shot down it may have been by a ground machine gun and this now seems probable. At the time of his death he was considered by his comrades as invincible and there was reluctance to believe that he could have been destroyed by another fighter pilot. There is an attempt to compare Richthoven with WWII pilots such as the RAF fighter pilot Bader. There were many significant differences between the two wars except perhaps on the Russian front. During WWI, fighter pilots who survived beyond the average were able to shoot down a high proportion of there kills where the enemy pilots were very young with very little experience and flying obsolescent machines. That encouraged high scores for the veteran pilots and they were allowed to fly on until they themselves fell. In WWII, the air war between Britain and Germany saw a much more even set of aircraft performance figures and in the early stages most pilots on both sides were professionals limiting the ace scores. To this, the RAF tend to rotate veteran pilots through rest and training squadrons so that pilots has fewer hours in combat. On the Russian front, it was more like the WWI experience with the Russians fielding poorly trained, led and equipped pilots, allowing the German aces to run up high scores and German pilots were also allowed to serve on in the front line until they were killed, or captured. After death Richthoven became a symbol and his body was moved several times before ending in a family plot. His story has been told very well in this documentary from a German view and although some may feel the commentary politically incorrect, it is authentic and history should be authentic to have real value.
Views from Richthoven's own diary were not just his social views, but common amongst his peers who were mostly noble and/or wealthy young men, very similar to their British opponents. When the Nazis later came to power, they included many similar young men in their ranks. History is perceptions. Two airmen who were contemporary and served with Richthoven were Goering and Hess. Goering took over the squadron after Richtoven's death and went on to become commander of the new Luftwaffe and a prominent Nazi Party member. Hess went on to become Hitler's deputy.

World War I German fighter ace Manfred von Richthofen, known as "The Red Baron", is shot down and killed over aux-sur-Somme in France.