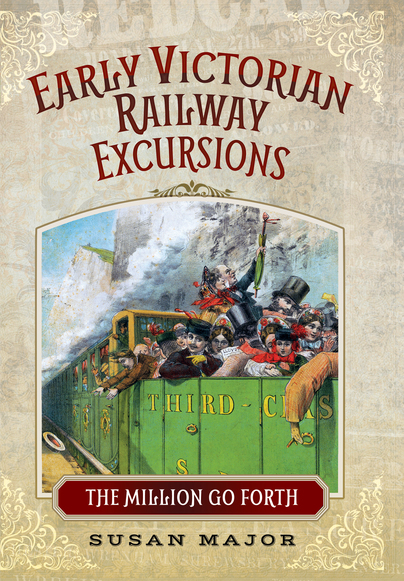 The Million Go Forth

As featured in BBC One documentary: Railways: The Making of a Nation

You'll be £17.50 closer to your next £10.00 credit when you purchase Early Victorian Railway Excursions. What's this?
+£4.50 UK Delivery or free UK delivery if order is over £35
(click here for international delivery rates)

There is a widely held belief that Thomas Cook invented the railway excursion. In fact, the railway excursion is almost as old as the railway itself, dating back to the 1830s, when hordes of people from one town would descend on another for a ‘cheap trip’. Susan Major has carried out much in-depth research for this book, drawing on contemporary Victorian newspapers, and has discovered that, in fact, Cook played a very minor role, mainly in encouraging middle-class people to go on more expensive excursions. Her book fills an important gap in railway history. It explores for the first time how the vast majority of ordinary working people in Britain in the middle of the nineteenth century were able to travel cheaply for leisure over long distances, in huge crowds, and return home. This was a stunning experience for the excursionists and caused great shocks to observers at the time. These ‘trippers’ had to overcome many obstacles, particularly from the Church of England and the nonconformist movement, who were affronted by the idea of people enjoying themselves on a Sunday, their only day away from work.

The book charts the story of the early railway excursions from the 1840s to the 1860s, a dramatic period of railway and social change in British history. It looks at how these excursions were shaped and the experiences of working-class travellers during this period, demolishing a number of clichés and myths endlessly reproduced in traditional railway histories. While Michael Portillo paints a picture of travellers sitting tidily in their railway carriages, consulting their Bradshaws, many working-class excursionists on their trips were hanging on to the roof of a crowded carriage, endangering their lives, or enduring hours of travel in an open wagon in heavy rain.

This is a fascinating, clear, well-referenced and elegantly annotated book. It is based on Dr Major's PhD thesis that was supervised by our current President, Professor Colin Divall. During her PdD studies Susan Major was in receipt of a grant from the HMRS Educational Award Fund.


Dr Major explores the explosion in mobility that came with the early railways, pointing out that whilst people had gone some distance on foot, by cart or boat for pleasure, the train opened up many more possibilities for both day and longer trips. However, the conditions in which they travelled, often in large numbers, were frequently less than perfect and she reminds us that the 1840s was also a decade of political agitation.

This is a terrific book, written in an accessible style - a valuable source book.

The author examines in great detail over nine chapters how excursions catered for all tastes, ranging from Sunday School outings to race meetings and prize fights.
There is a wealth of information for the serious student.

Recommended reading for all those interested in travel, tourism, leisure and working class culture in the mid nineteenth century.

There is a considerable amount of detail and interesting cameo examples that are set out in an easy to read style, making the book accessible and a pleasure to read.

There is a good selection of illustrations, with a very comprehensive set of notes and sources, together with an effective index. I have no hesitation in recommending this book, either to the casual inquisitive reader or someone more steeped in the knowledge of the railway and its social impact.

The source material is particularly rich in places and some excellent illustrations are provided, and the excursion train provides a fascinating insight in to leisure in the Victorian period.

An excellent book, warmly recommended.
Into the 'mutual antagonism' between the Chartists and the railway companies there is scope for further investigation and Dr. Major would be a most suitable person to undertake it.

Early Victorian Railways captures something of the tremendous excitement - as well as the reason why people endured its discomforts and dangers - of the huge social changes involved when cheap travel first became available to everybody.
Major provides a meticulously researched interpretation of how and why the travel industry for working people developed.

The author provides a detailed exploration of the phenomenon of the excursion in the period of the 1840s to the 1860s.

Major paints a national picture in this thorough book. Well worth reading.

This excellent study offers a social history of communities at play, and pays serious scholarly attention to the mechanisms by which working-class experiences were expanded with the development of the popular excursion, especially the excursion train.

This is an excellent book which does what its title suggests.

This is a ground breaking account of an important and neglected topic and deserves a wide readership.

The author charts the story of early railway excursions from the 1840s to the 1860s and in doing so presents a fascinating slice of railway and social history. Recommended.

Who Do You Think You Are? Magazine, Summer 2016

'This is a wonderful work of railway history. Using an amazing range of sources, it re-creates the teeming life of the early 'cheap trip', from the hardships endured by the travellers to the impact on the destinations which they invaded en masse. It's full of good stories, without losing sight of the wider picture. Sources and narratives are weighed with a true historian's care, alert to possible bias and hidden agendas. The writing is clear, calm and intelligent. The book also brings welcome breadth to an aspect of railway history that has been dominated for too long by the experiences of the well-off, travelling by scheduled train with first- or second-class tickets. Strongly recommended to anyone with an interest in Victorian social history, as well as to everyone who loves reading about Britain's railways.'

Major's very thorough and wide-ranging research has mined newspaper reports, court reports, letters and, most importantly (and pleasurably) diaries kept by those working class excursionists. She approaches the topic from the point of view of the huge social upheaval wrought by the railway with the sudden availability of unimagined mobility to all social classes, and brings into sharp focus the hostilities that this created in different sections of society at a time when old class certainties were already under great strain.

This is an academic treatise but will be welcomed by all interested in how railways evolved in to the burgeoning 20th Century excursion trains which just as quickly subsided when the private motor car usurped them.

The author has clearly carried out an extremely large amount of in-depth research for this book, as is obvious from no less than 25 pages of notes and references to contemporary newspapers and other Victorian publications.
From this, she has shown that the widely-held belief that Thomas Cook 'invented' the railway excursion is not true and that Cook played only a very minor role, encouraging the middle classes to go on more expensive excursions......

This is an academic treatise but will be welcomed by all interested in how railways evolved into burgeoning 20th-century excursion trains which just as quickly subsided when the private motor car usurped them.

Well produced on fine art paper, nicely illustrated and well-written. I thought it was entertaining and informative gem of a book.

As Susan Major points out in a book that vividly brings to life a Victorian phenomenon that swept through Britain from the early 1830s, it was not outside agents such as Cook who created the railway excursion but the railway companies themselves...

... The best chapter of the book, ' What Was it Really Like?', beautifully conveys the sense of adventure, excitement and even danger for these early excursionists.

... a book which vividly brings to life a Victorian phenomenon that swept through Britain from the early 1830s.

A track through a quite difficult time for railway researchers where the usual sources of material are rather rare; and I can assure you, it is readable!

This is obviously a very well researched book, as evidenced by the copious references to primary source material given in the footnotes. It is also superbly produced and printed. Yet while being scholarly, it is also an absorbing and fascinating read.
Susan Major has given this hitherto largely overlooked yet important aspect of railway operation the attention it deserves. Highly recommended!

This is a very interesting piece of social history little touched on elsewhere, and a well-researched exploration of both tourism and the railways.

"If you’re like me, and you forget to post your presents until after the deadline for the Christmas post, these recommendations may be of some use. The first book is a real gem of railway social history. Susan Major’s Early Victorian Railway Excursions is a very readable but scholarly account of how railway revolutionised leisure travel in the Victorian era. It goes well beyond the narrow confines of railway history and adds some valuable insights to the historiography of Victorian society and class relations. It also explores some interesting aspects of gender and the perceived morality of women travelling by train in the 1840s. It’s a great book to read on a charter train when it is stuck in a field near Wootton Bassett waiting for a replacement locomotive. Or at your fireside over Christmas."

'It is a meticulously-researched and well-illustrated account of the early days of the great Victorian railway excursions...'

This well-researched book challenges established history, offering an insight into the foundation of the leisure of industry and improved social mobility.