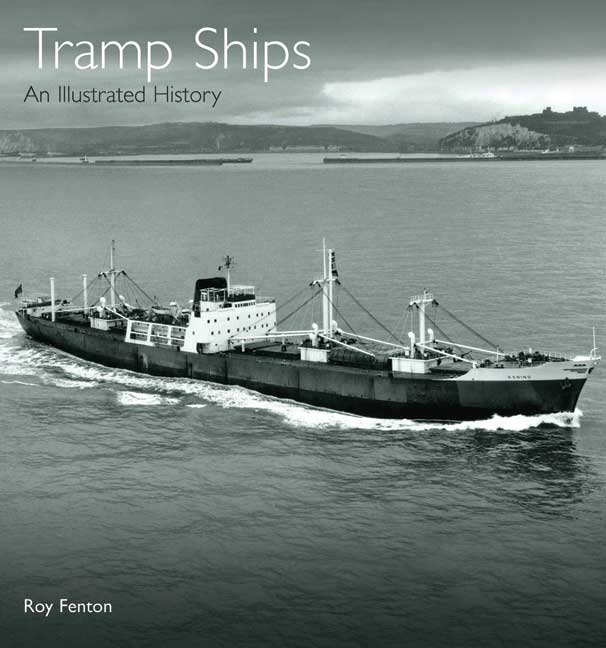 Add to Basket
Add to Wishlist
You'll be £30.00 closer to your next £10.00 credit when you purchase Tramp Ships. What's this?
+£4.50 UK Delivery or free UK delivery if order is over £35
(click here for international delivery rates)

Order within the next 1 hour, 53 minutes to get your order processed the next working day!

The tramp ship was the taxi of the seas. With no regular schedules, it voyaged anywhere and everywhere, picking up and dropping off cargoes, mainly bulk cargoes such as coal, grain, timber, china clay and oil. It was the older and slower vessels that tended to find their way into this trade, hence the tag 'tramp', though new tramps were built, often with the owner's eye on chartering to the liner companies. In this new book by the well-known author Roy Fenton, their evolution is described over the course of more than 100 years, from the 1860s, when the steam tramp developed from the screw collier, until it was largely replaced by the specialist bulk carrier in the 1980s.

An introduction looks at the design and building of tramps before going on to describe the machinery, from simple triple-expansion turbines to diesel engines. Their operation and management and the life of the officers and crews is also covered. The meat of the book is to be found in the 300 wonderfully evocative photographs of individual ships which illustrate the development of the tramp and its trades through the last years of the 19th century, the two world wars, and the postwar years. Each caption gives the dimensions, the owners and the builder, and outlines the career, with notes on trades and how they changed over a ship's lifetime. Design features are highlighted and notes on machinery included. This will become a classic work, to inspire all merchant ship enthusiasts and historians.

Tramp Ships: An Illustrated History is a valuable compendium devoted to a significant class of cargo ship that has been the mainstay of many a mercantile marine for more than three generations and trading in every ocean.

The meat of the book is to be found in the 300 wonderfully evocative photographs of individual ships which illustrate the development of the tramp and its trades through the last years of the 19th century, the two World Wars, and the post war years with Liberty ship and other replacements against losses. All are supported by a lengthy index of ship-names.

Without doubt this volume will become a classic work, to inspire all merchant ship enthusiasts and historians and once again we are able to appreciate the ships in which our forefathers sailed and earned a living.

A comprehensive and detailed book, which will prove popular to a general readership, and will also prove to be an important primer and source of reference on the evolution, heyday and demise of deep sea tramp ships for students of shipping in colleges and universities.

It is refreshing to see a book that has been designed to compliment the contents!The quality of paper and quality of reproduction of what are, primarily in the original, black and white photographic prints are excellent...Each photograph is accompanied by a comprehensive, informative and authoritative caption...The exposure and resolution of the photographs is very good...Images are excellent for recording detail...The author, Roy Fenton, has already established himself as an authority on the transition from sail to steam...An excellent choice of images... A quality production...Very useful bibliography and an index of all named ships.

Roy Fenton's books are always excellent and this is no exception.

The detailed captions give full details of each ship, and add to what is a very well produced and written book.

Every so often I find a book which is a sheer delight and the arrival of this particular work was such an occasion. This is a beautiful product with historic B&W pictures of the highest quality on almost every page. Overall, the book tells the story of different ship types through time and the way in which their design evolved. To support that story the author skilfully includes the right picture to match the text - at exactly the right time, often using whole or half-page images.

Suffice to say I really cannot recall ever having read such an educational and informative product about steel-hulled ships and the evolutionary process they underwent. In addition, I will never tire of looking at photographs of historic ships and this work had provided enough interest to last me a very long time indeed.