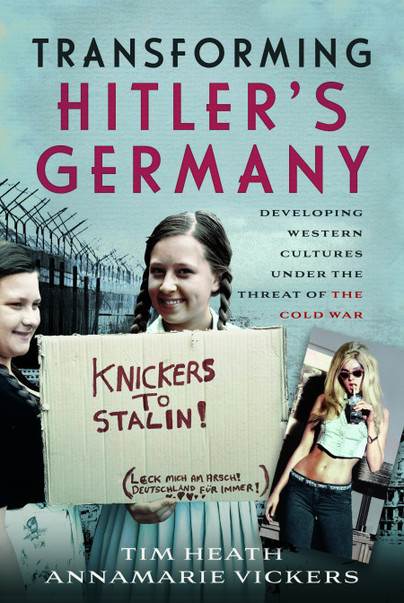 Developing Western Cultures under the Threat of the Cold War

Preorder
Add to Wishlist
You'll be £20.00 closer to your next £10.00 credit when you purchase Transforming Hitler's Germany. What's this?
+£4.50 UK Delivery or free UK delivery if order is over £40
(click here for international delivery rates)

As the last flames of the Second World War flickered and died, Germany emerged into an apocalyptic wasteland, where the Hitler Youth generation would be cursed with the running sore of National Socialism. With the uncaged bear of the Soviet Union flexing its muscles and the escalating tensions between East and West providing some distraction from the funeral pyre of the Third Reich, those living in West Germany soon understood that they were the geological bulkhead, a component in the prevention of communism spreading throughout the infantile peace of post-Second World War Europe.

Despite all the destruction and political tensions which surrounded them, the young men and women of Germany were keen to experience the world beyond their own precarious borders. In August 1945, Tia Schuster and Lisa Kraus were two fourteen-year-old Berliners, and - like many - they found themselves shoehorned into what was to be the second ‘new era’ of their young lives. The first had brought about only death and destruction, yet this second had a cold unfamiliarity about it.

As the late 1940s gave way to the 1950s and ‘60s, a series of new decadent eras - of rock-n-roll, fashion, flower power and sexual revolution - was on the horizon, which posed a threat to the traditional German way of life championed by the Nazi regime and post-Second World War German government. With this heady mixture of new-found freedom, the youth of Germany unwittingly became a feature of everything that both fascism and communism despised.

This unique work tells the story of the tentative steps taken by young men and women into the ‘afterlife of Nazi Germany’. Encompassing memoirs along the way, it presents a quirky portrayal of charm, humour, mischief and personal accomplishment along with a vitally important slice of (West) Germany’s social history, which has remained hidden from the literary world for decades. As Tia Schuster remarked:

‘The world suddenly became a very big piece of pie, we wouldn’t be happy with just taking a slice of this pie, no, we wanted the whole damn thing and we didn’t care if it made us sick or not!’

Tim Heath was born into a military family. Following the successful debut of Hitler’s Girls, Tim has published a number of titles, expertly ‘shining a light’ on the overlooked parts of an otherwise heavily scrutinised period of modern history.

Annamarie Vickers-Skidmore’s passion for literature and history led her to work in both commercial and battlefield tourism. AVCE Travel & Tourism, the company she currently works for, are one of the leading providers of Battlefield Tourism. Alongside her interest in military history, Annamarie has self-published 9 books of poetic and spoken word material. This is her first book for Pen and Sword.