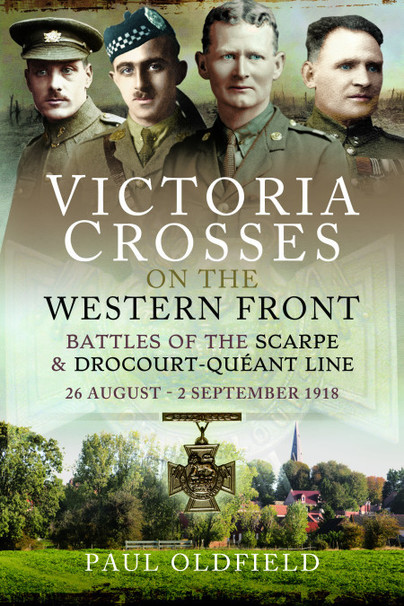 Click here for help on how to download our eBooks
Add to Basket
Add to Wishlist
You'll be £4.99 closer to your next £10.00 credit when you purchase Victoria Crosses on the Western Front – Battles of the Scarpe 1918 and Drocourt-Quéant Line. What's this?
Need a currency converter? Check XE.com for live rates

These books will tell you the tales and heroism of young men at war which is amazing, but it should be said that credit must be given to the author of these books Paul Oldfield, who really does these men a great service in telling their stories in great and fantastic detail. Credit to Paul Oldfield. In this book we follow the stories of two battles, the Scarpe and Drocourt-Queant Line from Aug-Sept 1918. A fantastic book packed with text, biographies, photos, maps and diagrams. A really good book that is easy enough to dip in and out of, a thoroughly good read and one to be recommended.

Overall, the book is a good book to read from cover to cover, or just to dip into whilst looking at particular stories. The stories such as this which are continually relayed in Oldfields work, are so important as they provide accounts of these deeds of heroism in central volumes for future generations to reference and in turn make sure that these stories fully live on.

A fascinating account of these two specific battles during the last year of the Great War...

Another excellent presentation from Paul Oldfield covering the VC’s awarded in this phase of the war and detailing the backgrounds to the actions and the recipients. This series of books is an ongoing joy.