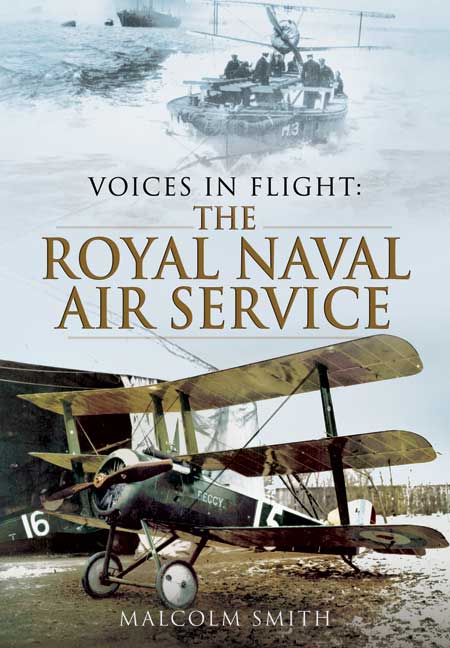 Voices in Flight: The Royal Naval Air Service During the Great War (ePub)

Click here for help on how to download our eBooks
Add to Basket
Add to Wishlist
You'll be £4.99 closer to your next £10.00 credit when you purchase Voices in Flight: The Royal Naval Air Service During the Great War. What's this?
Need a currency converter? Check XE.com for live rates

Following in the same style as his previous book of Fleet Air Arm recollections, Malcolm Smith has collected a compendium of reminiscences from pilots who flew for the Royal Navy and the Royal Marines during the First World War. He includes first-hand testimonies from pilots manning early seaplane stations, an enthralling account from F.J. Rutland (the 'Rutland of Jutland'), who became the first pilot to take off in a Sopwith Pup from a platform on the roof of one of HMS Yarmouth's gun turrets, the true tale behind Rudyard Kipling's short story 'A Flight of Fact' (concerning Guy Duncan-Smith's experience of becoming marooned in the Maldives following a dramatic shoot-down), amongst many other personalized and illuminating stories.

All these anecdotes are drawn from the extensive archive maintained by the Fleet Air Arm Museum at Yeovilton, Somerset. The archive contains an enormous quantity of material, in the form of handwritten diaries, transcripts, log books and documentation of many kinds. Alongside the written material, the Museum maintains an unrivaled photographic archive and a representative sample of these images is included in the book.

Excerpts from diaries, transcripts of spoken first-hand accounts and other recorded narratives make up the bulk of the book, with whole chapters dedicated to some of the most vocal members to see service during the course of the RNAS's Great War history. Guy Leather, a pilot destined to track an impressive trajectory with the RNAS features in one such chapter; his day to day accounts relay the full gamut of pilot experience at this time.

This humane and thoughtful consolidation of pilot reflections is sure to appeal broadly, particularly as we approach the one hundredth year anniversary of the First World War.

Voices in Flight: The Royal Naval Air Service During the Great War helps to inform us today of what was and what was not accomplished by those who served in the navy’s air service during the first truly joint war – on land, at sea and in the air. Malcolm Smith gained unprecedented access to the extensive archive of the Fleet Air Arm Museum at Yeovilton in the UK.

Using diaries, handwritten notes, transcripts, log books and records of various kinds, Smith has been able to assemble individual stories of what it was like to be a British naval aviator during WWI. In doing so we gain knowledge of the great variety of tasks undertaken – fighting in aerial operations over land and sea as well as in mechanised vehicles used in land operations in Northern France and Belgium, Gallipoli and Russia...

... The Royal Naval Air Service During the Great War is a remarkable collection that thrusts the personal perspective into the often bland official narratives of the Great War. By highlighting the importance of naval aviation in the past this book will help to inform the future. The resourcefulness and flexibility demonstrated by those who served in the RNAS between 1914 and 1918 offers a valuable example for those who serve in today’s Australian Defence Force.

Numerous stories to be treasured, one wished there had been space for more.

This is a revealing, and sometimes surprising record of the history of the RNAS from eyewitness accounts.
The book will appeal to aviation historians and family historians whose forebears were members of the RNAS during its relatively short life from July 1914 to April 1918 when it merged with the RFC to form the RAF.

A wonderful compendium of reminiscences drawn from the archives of the Fleet Air Arm Museum at Yeovilton.
An excellent book.

These first-person accounts represent a wide variety of RNAS personnel, from low-ranking enlisted men to senor officers - who seem to have been selected for their ability to communicate interesting stories.
This is a fine book; it offers solid evidence that many good and interesting stories are hidden away in archives and should be brought to light. Thus, it is recommended highly.

A sterling collection of first-hand accounts drawn from the diaries and recordings of those who served with the Royal Navy and Royal Marines in the Royal Naval Air Service during the Great War. This is a remarkable and engaging collection and should be on every reader's 'Great War books to read' list.
A must-read. 10/10

By choosing his material carefully and sequencing it sensibly, the author provides a vast amount of information that is easy to digest.
There are major sections on the main theatres of RNAS activity: Home Waters, the Western Front and the Mediterranean & the Middle East. The recollections provide a clear understanding of the work done by the RNAS in each of these.
The photographic illustrations are mainly familiar but it's the text that's important. This deserves successful sales.

As seen in the Western Gazette.

The author...has admirably handled a wealth of information to capture an element of the First World War that could be overlooked in this centenary year...Superb photos accompany the accounts.

There are far too few books about aviation in the Great War, so it was with delight that I could read of the adventures of people who were actually flying and maintaining, airships; dirigibles; and aeroplanes. Their accounts are admirably supported with a succession of superb photographs, with excellent explanations.

This is a seriously good book and will not disappoint!