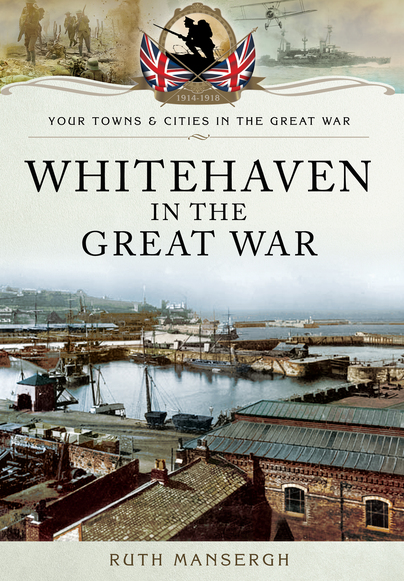 Whitehaven in the Great War (ePub)

Click here for help on how to download our eBooks
Add to Basket
Add to Wishlist
You'll be £4.99 closer to your next £10.00 credit when you purchase Whitehaven in the Great War. What's this?
Need a currency converter? Check XE.com for live rates

Whitehaven in the Great War covers Whitehaven's immense contribution to the Great War effort; it is thought that 625 Whitehaven men – from a town that, in 1901, had a population of around 21,000 – lost their lives fighting in the war. Meanwhile, on the home front, military service deprived many businesses of their established male workers, and women went to work in what had previously been exclusively male areas of employment.

It was often said, 'No bombing Zeppelin or Gothe ever attacked our peaceful backwater during hostilities.' However, on 16 August 1915 a U-boat, U-24, shelled the Harrington Coke works at nearby Lowca. This unexpected attack caught the community off-guard, and during the hour-long bombardment fifty-five shells rained down on the factory and the surrounding area – not one single shot was fired in return.

War memorials to those killed in the Great War have been moved following church closures, however this book acts an practical reference guide to where these memorials stand today. Interesting stories come to light, like that of Baden Powell Thornthwaite, whose name was inscribed on a local grammar school war memorial, who had not died after all, but most likely deserted.

One of the great joys of this sort of book is the discovery of new facts about a familiar area. For me the biggest surprise was the presence of a small German POW camp at Wasdale Head (although a post-war visit makes this sound like a rather relaxed camp, with the POWs living in dormitaries in one of the old farms, with no barbed wire), and a slightly larger one on the edge of the fells.

This book covers Whitehaven and the surrounding areas for sometimes quite a few miles around; it is the product of much research and is well referenced. To anyone living in the southern part of West Cumbria, or its considerable diaspora, there is interest to be found in the stories it uncovers. To read rolls of honour or war memorials is to see lists of names, however a book such as this which puts stories to names, and sometimes faces, is illuminating and gives humanity to what would otherwise be sterile. So many heroes and heroines that I have never heard of have their exploits recorded here; so many personal stories, punctuated with events in the area during the war and at the front. It tells of prisoner of war camps, Belgian refugees, football matches and is a little selection box of local history. I particularly liked the story of the people of Whitehaven flocking down to the harbour to wave at a German U boat as it corroborates what my grandfather told me many years ago, and I never knew whether to believe it or not until I saw it confirmed here. Any marra could read this book and enjoy it; and many others beside. It made me quite proud of the part my home town played in the Great War. It's a good 'un and written by someone who knows what she's doing.