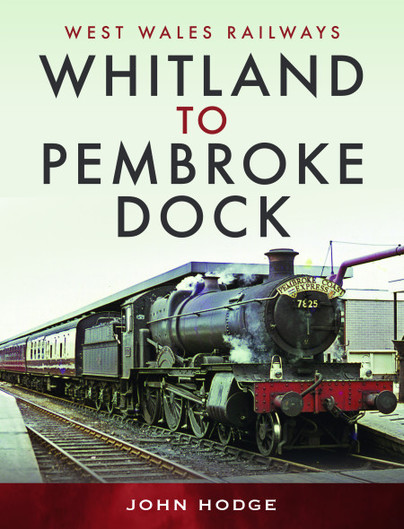 Add to Basket
Add to Wishlist
You'll be £22.50 closer to your next £10.00 credit when you purchase Whitland to Pembroke Dock. What's this?
+£4.50 UK Delivery or free UK delivery if order is over £40
(click here for international delivery rates)

Whitland to Pembroke Dock is the latest book in the West Wales Railways series which continues the previous South Wales Main Line series covering the line from the Severn Tunnel through to ends of the main line in West Wales. This volume covers the section from Whitland to Pembroke Dock, a largely agricultural and holiday line, centring on Tenby and Pembroke. The line was worked by Whitland depot which was a steam sub-shed of Neyland, with its own allocation, mainly of tank engines. These worked the Cardigan and Pembroke Dock branches until the former was closed under the Beeching closures of the mid-1960s, when the engine shed was closed under dieselisation in 1964. The volume of freight traffic was radically affected by the withdrawal of goods sundries and parcels traffic, but especially by the withdrawal of wagon load freight traffic in 1976, which had brought much Animal Feed and Farming traffic to the line. Like much of South Wales, the traffic is now purely passenger with DMUs though Summer Saturdays still sees a through train now with IETs to and from Paddington, carrying on the service from HSTs. The previous Pembroke Coast Express in steam and early diesel days was the prime train on the branch running to and from Paddington and is still reproduced in the modern preserved steam special workings.

John Hodge continues his series on West Wales Railways with the latest volume, this time, the line from Whitland to Pembroke Dock. As with other volumes in the series there is a logical layout of an introduction accompanied by an excellent map of the line.

There then follows a ‘Location analysis’ station by station down the line to journeys end at Pembroke Dock. Each one has a brief history which includes layout changes.

The accompanying photographs major on the classic ‘Front three-quarter’ shot loved by photographers, although there are at times station views which are ideal for modellers.

Again an interesting volume and I look forward to reviewing the final volume to Milford Haven & branches to see how it is produced.

Another great book from the author.

A detailed history of the branch. Contains some great photos including many in colour. Including to the present day.