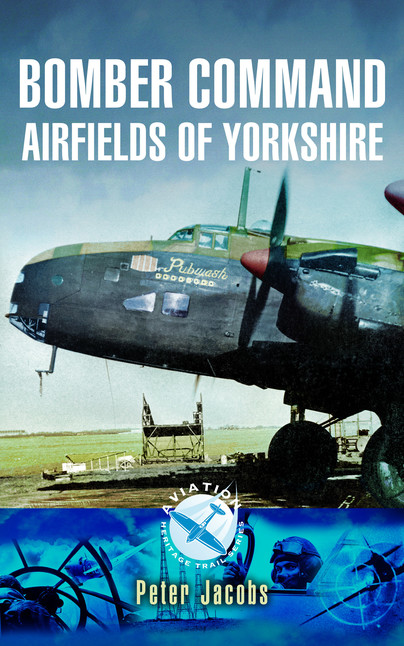 Click here for help on how to download our eBooks
Add to Basket
Add to Wishlist
You'll be £4.99 closer to your next £10.00 credit when you purchase Bomber Command Airfields of Yorkshire. What's this?
Need a currency converter? Check XE.com for live rates

As part of the Aviation Heritage Trail series, the accomplished military author and former RAF Officer Peter Jacobs takes us to the county of Yorkshire and to its many bomber airfields of the Second World War.

From the opening day of hostilities, RAF Bomber Command took the offensive to Nazi Germany and played a leading role in the liberation of Europe. Yorkshire’s airfields played a key part throughout, initially as home to the Whitley squadrons of No 4 Group and then to the four-engine Halifax heavy bombers; indeed, Bomber Command’s first night operation of the war was flown from one of the county’s many bomber airfields. Then, as the bombing offensive gathered pace, Yorkshire welcomed the new all-Canadian No 6 (RCAF) Group, after which all of Bomber Command’s major efforts during the hardest years of 1943/44 – against the Ruhr, Hamburg and Berlin – involved the Yorkshire-based squadrons.

Most of Yorkshire’s wartime bomber airfields have long gone, but many have managed to retain the flying link with their wartime past. For example, the former RAF airfields of Finningley and Middleton St George, and the factory airfield of Yeadon, are now the sites of international airports, while Breighton, Burn, Full Sutton, Pocklington and Rufforth are still used for light aircraft flying or gliding and Elvington is home to the magnificent Yorkshire Air Museum.

From airfields such as these came countless acts of personal courage and self-sacrifice, with two men being awarded the Victoria Cross, Britain’s highest award for gallantry. Stories of both men are included, as are tales of other personalities who brought these airfields to life. The stories of thirty-three airfields are told in total, with a brief history of each accompanied by details of how to find them and what remains of them today. Whatever your interest, be it aviation history or more local, the county of Yorkshire has rightly taken its place in the history of Bomber Command.

This astounding tale of heroism and loss is just one of the many harrowing stories of aerial combat operations to be found in Bomber Command: Airfields of Yorkshire, by Peter Jacobs. Airfields of Yorkshire begins with a tidy and informative overview of the RAF’s bombing campaign against Nazi Germany, covering the design and facilities of Bomber Command’s Yorkshire airfields, the command structure of the air groups, and the development of the tactics and technology that were required to hit the enemy at night. Subsequent chapters focus on the various specific airfields, detailing the individual missions that were flown, the aircraft that operated from these fields, their squadron orders of battle, and the contemporary dispositions of these historic locales. This rich volume, handsomely rounded out by a considerable gallery of unique photographs, immerses the reader in the life and ways of an RAF/RCAF bomber base during the Second World War.

This book gives details of the airfields of Bomber Command that were constructed and in use in Yorkshire. Here we find when they were built, came into use, and the type of aircraft and squadrons that operated from each of the airfields.
It is not only a mine of informative detail, but also discloses some of the personal stories of men and women stationed at these airfields.
This book is an interesting and useful addition to Bomber Command's essential role in the Second World War.

From the opening day of hostilities, RAF Bomber Command took the offensive to Nazi Germany and played a leading role in the liberation of Europe. Yorkshire’s airfields played a key part. Today most of them have long gone, but many have managed to retain the flying link with their wartime past. The former RAF airfields of Finningley and Middleton St George, and the factory airfield of Yeadon, are now the sites of 32 The late medieval Raglan Castle in Monmouthshire. During the English Civil War the castle was held on behalf of Charles I and was taken by Parliamentary forces in 1646. In the aftermath, the castle was slighted, a similar if somewhat less dramatic
fate to our own Sheffield Castle.

Gladiator’s entrance at Caerleon amphitheatre
international airports, while others are still used for light aircraft flying or gliding and Elvington is home to the Yorkshire Air Museum.
In his new book author Peter Jacobs (a former RAF Wing Commander) takes us through the history of some thirty- three sites and how to find their remains today.

Amongst the countless acts of personal courage and self-sacrifice are included the stories of two men being awarded the Victoria Cross, along with the tales of other personalities who brought these airfields to life. This is a comprehensive book which would appeal to those with an interest in aviation or our history.

A comprehensive review of Bomber Command’s airfields in Yorkshire, reviewed alphabetically. The author has assembled a collection of reviews of airfields in one geographic area of Britain during WWII that were primarily, or exclusively. used as bomber bases – Highly Recommended.

This is another well researched book from Peter Jacobs and one that is a handy size to keep in the car. Whether you are a historian with an interest in Bomber Command, or perhaps looking for the place where your father, grandfather or other relative served during the war and you are trying to trace more about their experiences. While areas such as these continue to be developed it is good to know just what remains to be seen of this period in our history.