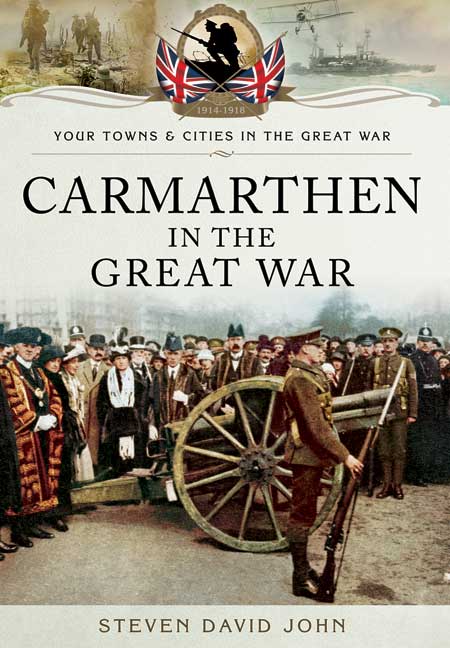 Carmarthen in the Great War (ePub)

Click here for help on how to download our eBooks
Add to Basket
Add to Wishlist
You'll be £4.99 closer to your next £10.00 credit when you purchase Carmarthen in the Great War. What's this?
Need a currency converter? Check XE.com for live rates

How the experience of war impacted on the town, from the initial enthusiasm for sorting out the German kaiser in time for Christmas 1914, to the gradual realization of the enormity of human sacrifice the families of Carmarthen were committed to as the war stretched out over the next four years. A record of the growing disillusion of the people, their tragedies and hardships and a determination to see it through.

By the time that war erupted in Europe in August 1914, Carmarthenshire had moved from its rural roots into a new industrial age, with great coalfields around the Amman and Gwendraeth Valleys, and the coal, tin and steelworks around Llanelli and Kidwelly. This industrialisation had changed the county forever, with towns like Ammanford, Llanelli and Kidwelly transforming themselves from their original small villages into sprawling towns. The population of the county had surged, so the Great War would see vast numbers of men from the county enlist into the armed forces and head for war, many never to return. 'Carmarthen in the Great War' covers the lives and deaths of many of the brave young men that left the county, interspersing their tales with stories from the home front, which show how the war changed life in the county forever.

As featured in the Carmarthen Journal and Wales On Sunday.

An extremely interesting and well-researched book chronicling the progress of the war and showing how it affected local communities in Carmarthenshire. A treasure trove of information for all families whose ancestors served in the Great War