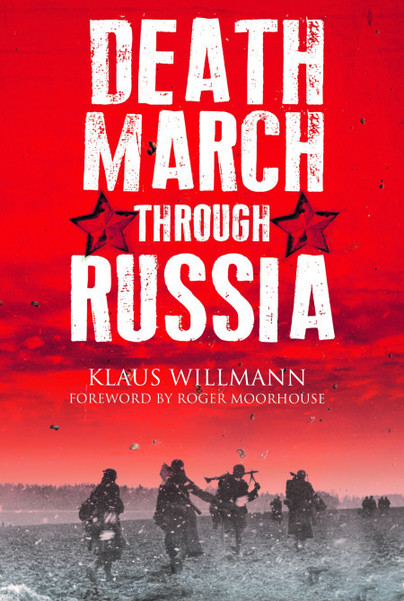 The Memoir of Lothar Herrmann

Click here for help on how to download our eBooks
Add to Basket
Add to Wishlist
You'll be £4.99 closer to your next £10.00 credit when you purchase Death March through Russia. What's this?
Need a currency converter? Check XE.com for live rates

In this rare World War II memoir, Lothar Herrmann, a soldier from the Wehrmacht, details his unimaginable experience as a German Prisoner-of-War in the Soviet Union.

Hermann grew up in Bavaria, going through the RAD (Nazi Labour Service) before being conscripted into a Wehrmacht Mountain Division (the Gebirgsdivision) in 1940. He participated in Germany’s advance through southern Ukraine in 1941 and, in 1944, was arrested in Romania while retreating to Germany. The Romanians passed him onto the Soviets, who placed him in a forced labour camp, where he watched two-thirds of prisoners around him die. In 1949, Herrmann was finally released to Germany and returned to Bavaria.

Three million German troops were taken prisoner by the Red Army and around two-thirds of them survived to return to Germany in 1949, but their stories are little known. Klaus Willmann draws on interviews he conducted with Herrmann, to recount these astonishing recollections in the first-person. Depicting the challenges of growing up in Nazi Bavaria to becoming a Soviet prisoner-of-war, this is a gripping and enlightening account from a necessary but rarely explored perspective.

This offering covering the memories of Klaus Wilmann, telling the story of his life during World War II, and subsequent life as a prisoner of the Soviet forces is an informative read, that covers an important aspect of World War II, and the years after. The treatment endured is reminiscent of that metered out to Russians civilians and military alike, by some elements of the German Military, that does not come close to the treatment of Jews during this horrific period.

The book provides a glimpse into the life of a German soldier after he is taken prisoner, and the reflections of that soldier. Careful attention is paid to his experiences and the circumstances through which he and other prisoners lived. By relaying these experiences, the book provides a interesting contribution to the historiography of German prisoners of war in the Soviet Union.

The story is very beautifully written and I thought had great detail, and for him to be so hopeful and cheerful in dark times is astounding. The book is easy to read, it doesn’t go into huge detail but then doesn’t also become too light. It is a harsh story and very good to read from a point of view I hadn’t actually read about before. I would recommend this book any other reader.

All war can be brutal and tragic, but the war between Germany and the Soviet Union was in a class of its own, a celebration of inhumanity. The author has provided a picture of this brutal conflict’s painful ending for so many German soldiers. – Most Highly Recommended.

This is a first hand account of a German pow at the hands of the Russians.... It is a harrowing tale but one that should be read and understood.
It has an easy flow to it and also told without bravado and is told exactly as it happened.
This is really recommended as an alternative to what you read from everyday books that don't deal with how the German pow were treated.

It is perhaps improper to describe a book that describes much abject misery as an enjoyable read but this book, despite its story, is very enjoyable. It is the simple narrative of the life of Lothar Hermann, an ordinary Wehrmacht soldier and in particular his time in captivity enduring forced labour until his release in 1949. ‘Enduring’ is the key word as it is a story of endurance and the triumph of a strong minded young man over the physical and mental punishments he had to deal with. Throughout his story he does not invite sympathy; he recognises that his misfortunes were shared not only by millions of other German POW’s but also the Russian population who were scarcely better off. Occasional glimpses of kindness and hope define the victory of the human spirit over the dehumanising conditions; the chapter on his capture is particularly troubling. This is one of an increasing number of translations of German personal accounts and is well worth the read to balance the rather binary ‘Nazis versus the rest’ histories.

Lothar Herrmann was born in Silesia in 1920 in Silesia. He was enlisted for war at the age of 20. His company had been advancing on Russia when he was diagnosed with asthma and sent back to Germany, where he was able to spend the next two years in recovery in his hometown Garmisch-Partenkirchen. His luck ended abruptly though when he was declared healthy enough to return to the Eastern Front. On the day before his 24th birthday, Herrmann was taken into Russian war captivity in which he stayed long after the war had ended. It was not until 1950 that Herrmann was free to return home where he came down with hepatitis.