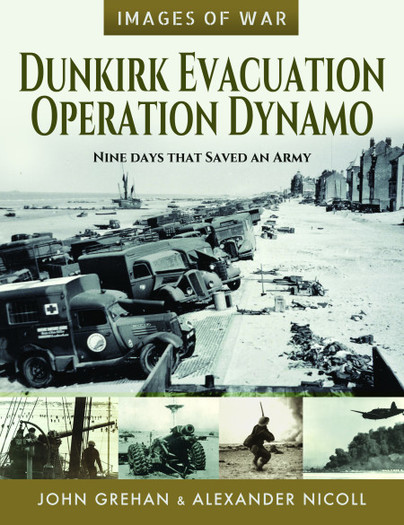 Add to Basket
Add to Wishlist
You'll be £15.99 closer to your next £10.00 credit when you purchase Dunkirk Evacuation - Operation Dynamo. What's this?
+£4.50 UK Delivery or free UK delivery if order is over £40
(click here for international delivery rates)


This is a really thought-provoking book and again, I would certainly recommend it to members.

This is a really thought-provoking book and I would certainly recommend it to members.

This is an interesting and well compiled picture book covering nine famous days in May-June 1940.

'Dunkirk Evacuation Operation Dynamo' published by Front Line Books, is a pictorial description of a defeated British army. To be savoured in the historical sense. The men fought a war with they were given and while Germany re-armed with modern weapons, British politics reduced the military budget. Many soldiers rescued were later sent to Singapore which suffered the same fate as Dunkirk. Only allowed one miracle they were captured by the Japanese died building a railway.

An essential work in our library.

I have no hesitation in recommending this book. The Images of War series comprises of works of a generally high standard. In my opinion, this book raises the overall standard to a new level. I can think of no better, or accessible book to read on the 80th anniversary of Operation Dynamo.