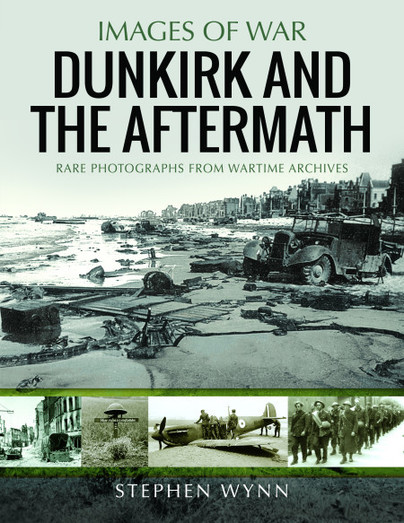 Dunkirk and the Aftermath (Paperback)

As featured in the Daily Mail: 'Photos taken after Dunkirk evacuation show the thousands of vehicles and weapons abandoned to Nazis.' Click here to read the full article.

You'll be £10.49 closer to your next £10.00 credit when you purchase Dunkirk and the Aftermath. What's this?
+£4.50 UK Delivery or free UK delivery if order is over £35
(click here for international delivery rates)

Operation Dynamo, the successful evacuation of Belgian, British, Dutch, French and Polish troops from the beaches at Dunkirk between 27 May and 4 June 1940, was not only a pivotal moment of the war, but one that changed its final outcome.

There has been much debate in the years since the end of the war concerning the “Hitler Halt” order, which was given to German Panzer units waiting patiently on the outskirts of Dunkirk to be allowed to finish the job they had started. Many theories have been put forward as to the reasons behind this, but the consequence was that it allowed Britain to remain in the war.

A total of 338,226, British and Allied troops were rescued from the beaches of Dunkirk, aboard a total of 861 vessels, of which 243 were sunk. For those left behind, official figures record that up to 80,000 French and British troops were captured, whilst during the time of the actual evacuation, somewhere in the region of 16,000 French and 1,000 British soldiers were killed.

It is known that two atrocities took place during the Battle of Dunkirk: the Massacre at Le Paradis, and another at Wormhoudt, carried out by Waffen- SS soldiers, against British and French troops who had already surrendered.

Although the Battle of Dunkirk must ultimately go down tactically as a German victory, the rescue of so many of its men, ensured that like a phoenix, Britain rose from the ashes of defeat to gain a great and lasting victory.


"The majority of the photos are large enough to enable good study of what’s depicted."

This is the second title I have looked at from Pen and Sword as part of the Images of War series covering the Dunkirk evacuation and as always I am pleased with what I have seen and read. I have built up a steady number of the books in this series as they are affordable and provide visual resources on specific units, events or equipment that are hard to beat for the price.

Pen and Sword's latest volume in their iconic Images of War series tells the story of what happened in the hours and days following the evacuation of Dunkirk. Amazing images!

I have really enjoyed reading this book, it’s one of those events that have fascinated me for a while, and I have lots of questions about various things but that is probably for another day. As usual, I love these images of war books and although we can shout out about the photographs the writing is always detailed and informative.
Read the full review here

There are quite a few well known images from Dunkirk in this book - but some have left me thinking. Rather than review ‘Dunkirk and the Aftermath’, I prefer this week to just feature some of the images with captions from this volume, along with a short excerpt.

The spoils of Dunkirk: Unseen photos taken soon after historic Allied retreat reveal just some of the thousands of vehicles and weapons abandoned to the Nazis